I only have 1% left of available space here on this blog, but I wanted to say a message to all the kids out there:

I’m thinking of all you kids out there in the entire world, praying for you, sending you positive vibes.

The world itself will eventually get through this.

I worry about you all individually, though.

You may have noticed that my blog here has stopped abruptly.  For the second time, I’ve reached my limit allowed by WordPress.

The first time, I moved from “Free” to “Payment Plan” so I could keep posting.

This second time, I can’t afford to move up to the next level of payment. It’s very expensive for me. Thus, my blog about Fukushima, and trying to help kids around the world learn about Fukushima, ends here.

I am NOT asking for money. This is not a go fund me or anything like that.

Do not make the mistake of thinking of the nuclear disaster as “Fukushima.” Remember: The nuclear power plant which melted down did NOT supply electricity to Fukushima; it supplied electricity to the Tokyo Region. The plant was owned by Tokyo Electric, but we in Fukushima receive our electricity from a different source (Tohoku Electric.)

Farewell. May we meet again.

I took photos one morning out the window of my husband’s boyhood bedroom….. 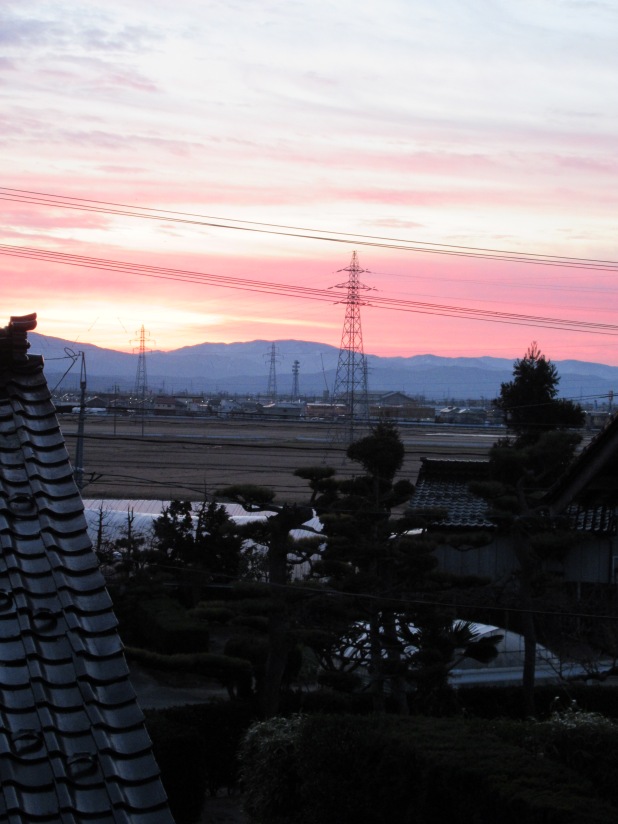 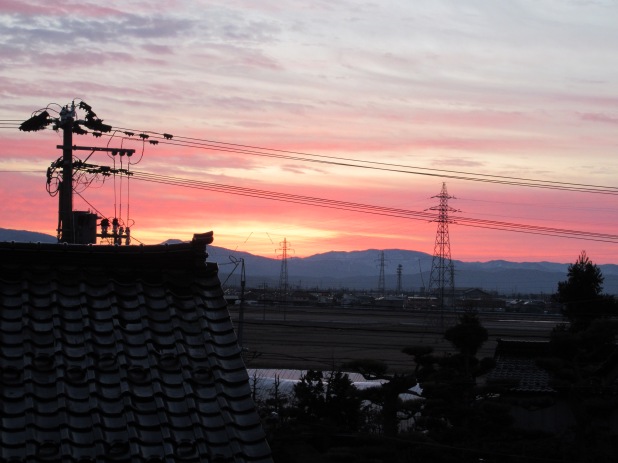 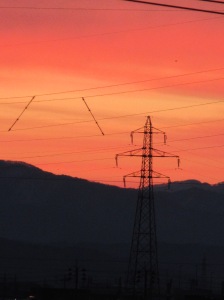 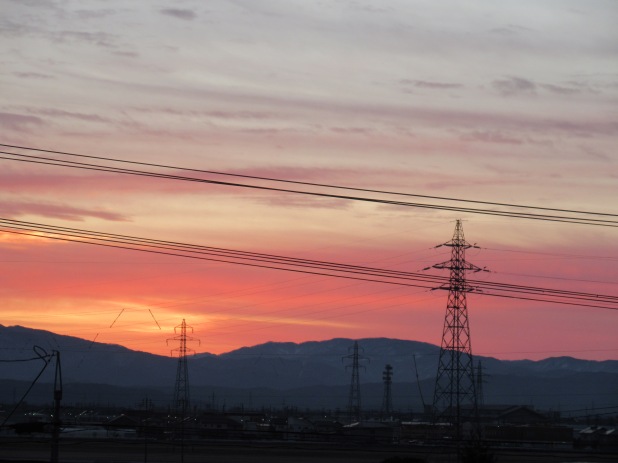 I think that I shall never see

A pylon lovely as a tree.

But metal giants made by man

Allow us to enjoy our span

With auto wash and TV shows

And frozen food that quickly goes.

We happy fools enjoy our ease

Enabled by those metal trees.

From the second floor of my PILs’ home in Sakata City, Yamagata Prefecture.

After Christmas, we left Fukushima for Sakata City (the home of my parents-in-law) on Tohoku’s west coast. 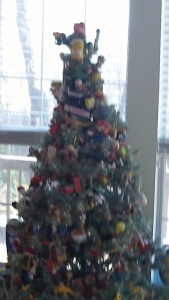 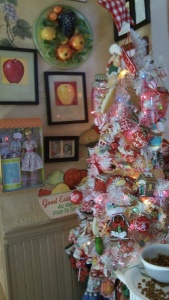 No, I am not in the United States. I am in Fukushima City. So what’s the news here?

This is a news article about what is being considered to be done with irradiated water:

Irradiated water is still accumulating, says the article. What to do? What to do?

The Ministry of Magic’s Delores Umbridge has determined the best thing to do is to whisk a wand over the water and drink it like soup. Cornelius Fudge, however, thinks it would be best to raise tadpoles in the irradiated water and see what happens. Perhaps some very exciting results.

One thing is for sure. It’s not a laughing matter.

Thursday, December 26, 2019, the Emperor and Empress of Japan will visit both Miyagi Prefecture and Fukushima Prefecture. Their reason for coming to Tohoku is to visit two areas that were hard-hit (and still suffering) due to a terrible typhoon that struck in October (2019) in Japan, and to give support to the people of those areas.

And now one of my favorite dogs, Chako. She is super duper sweet. 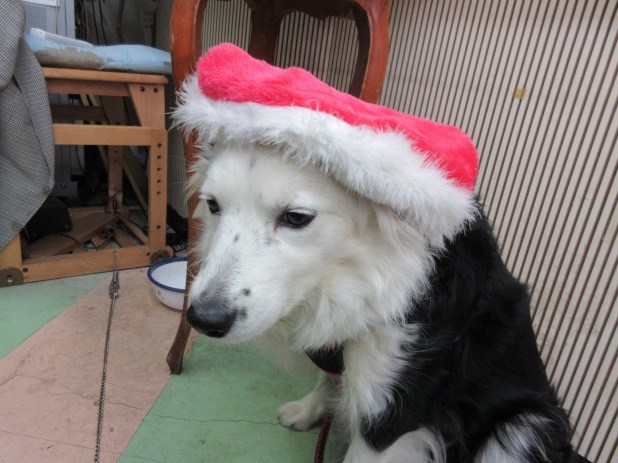 Article about the 2020 Tokyo Olympics:

If you can’t read it, it’s about how parts of Fukushima Prefecture have not recovered yet from the triple tragedy of 2011, but the Olympics are being held in Japan in summer of 2020. Furthermore, some people still can’t return to their homes in Fukushima.

The article focusses on the extremely hard-hit town of Futaba.

My own personal opinion: It’s hard for me to get excited about the upcoming Olympics. I see it as basically a party for Tokyo, yet life is still hard for many in Tohoku due to the triple disaster.

We moved from Chiba Prefecture to Fukushima Prefecture in 2006. At that time, my son was small, so I often took him to Shinhama Park. Lots of people walk their dogs in that park. One man had a dog named Nikko that was just gorgeous. She was a Borzoi.

Well, Nikko passed away last year. Yesterday I was on my way home from shopping and saw that man out again. He told me he had gotten a new Borzoi, a female named Marie. (“Like Marie Antoinette,” he said.) 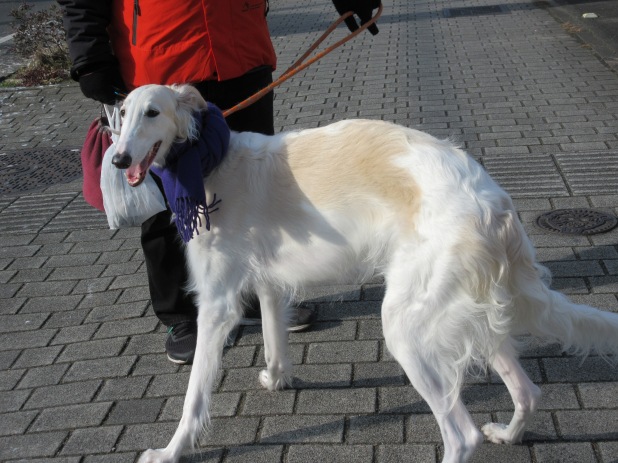 She’s still a puppy, he told me. 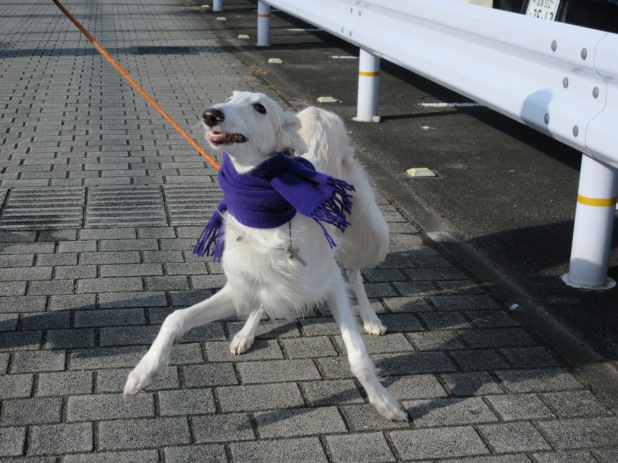 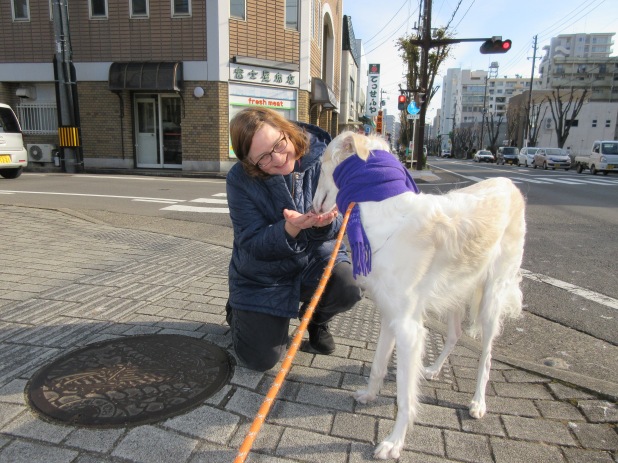 Like Nikko, Marie seemed a little skittish around me (a stranger.) She reminded me of a slightly highly-strung colt!! 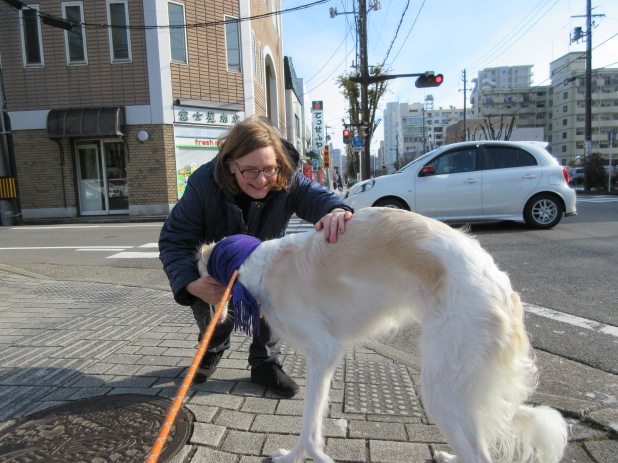 I don’t notice a lot of large dogs. Some, but not a whole lot.

The most unusual breeds I’ve ever seen were this Borzoi and once a woman had two Afghan Hounds.

Dogs are really and truly treated like children where I live! 🙂

In the days after the quake on March 11, 2011, Edano Yukio was the man I remembered seeing on the news after the quake, giving press conference style reports of what was going on at Fukushima Dai-ichi Nuclear Power Plant.

Indeed, he is the man everybody in Japan remembers seeing on their TVs.

At that time, he was Japan’s cabinet minister.

I didn’t really know who he was. I just thought of him as the man in blue.

He was famous in the United States, too, I think, because a search reveals him to be among TIME magazine’s 2011 Candidates for Person of the Year.

Because Edano was the spokesperson on TV after the quake, I will be translating his early newscasts (now on youtube) from March 2011 to find out what Japan was being told/not being told.

At a certain grocery store I occasionally shop at (not often–it’s far to ride my bike there,) there is a hair salon where some little lovelies live. 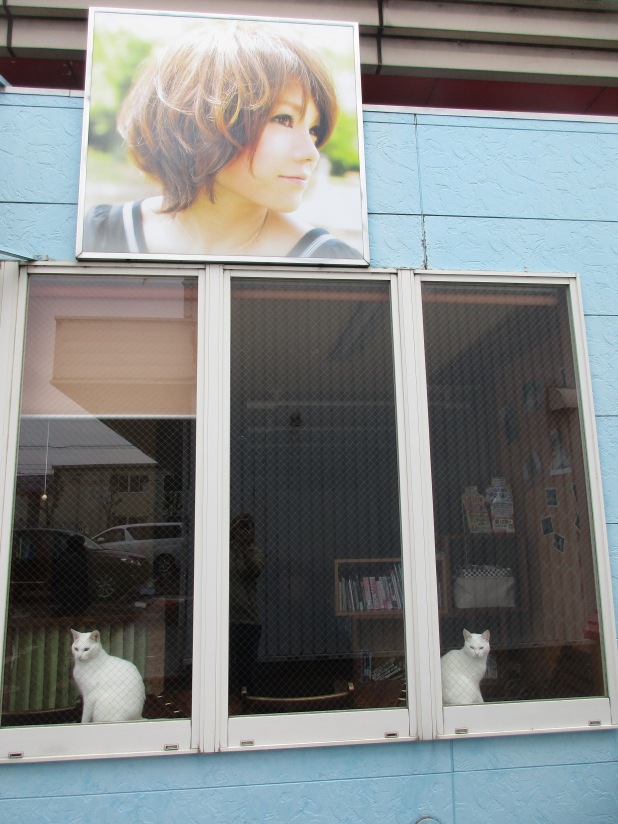 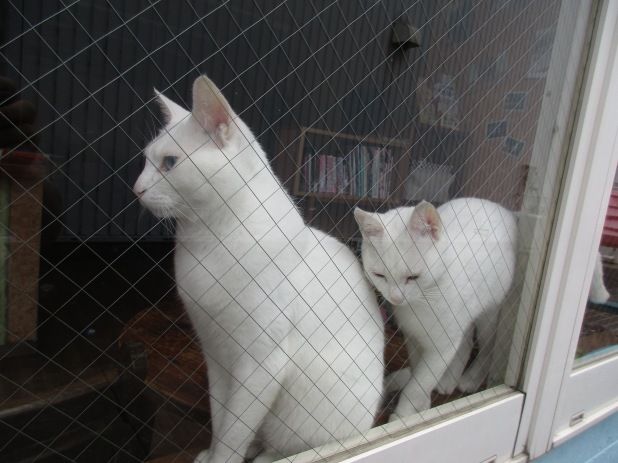 Cats have an “unfriendly” reputation, but based on my own experience, cats love each other a lot!

We had a Persian cat for many years when I was a child. Then we got a Siamese cat. They became the best of buds.

Judging by their appearance, these cats are likely siblings…..so a very close relationship, indeed! 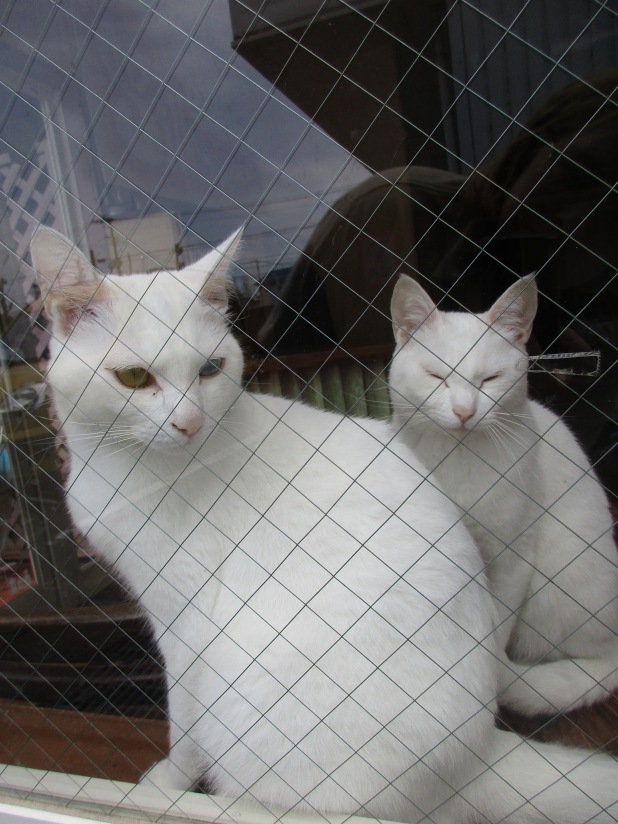 I wonder what they think about me. 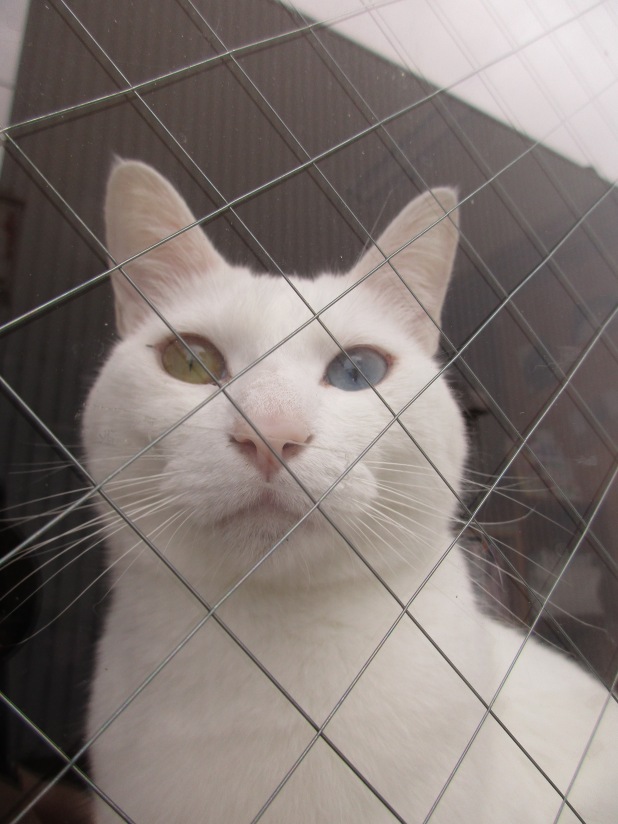 This little gal has eyes that are two different colors. 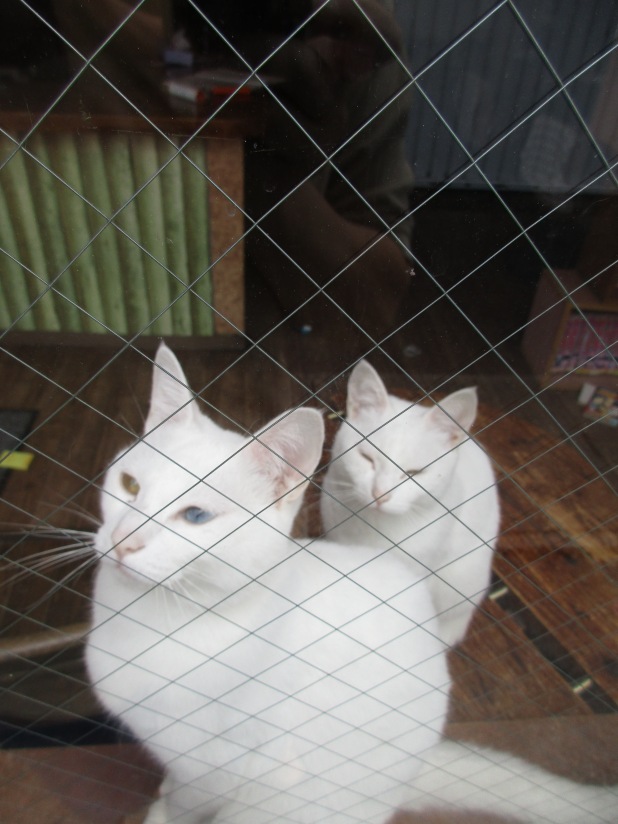 I love cats because they give me inner peace and joy.