Have a safe and fun-filled evening! 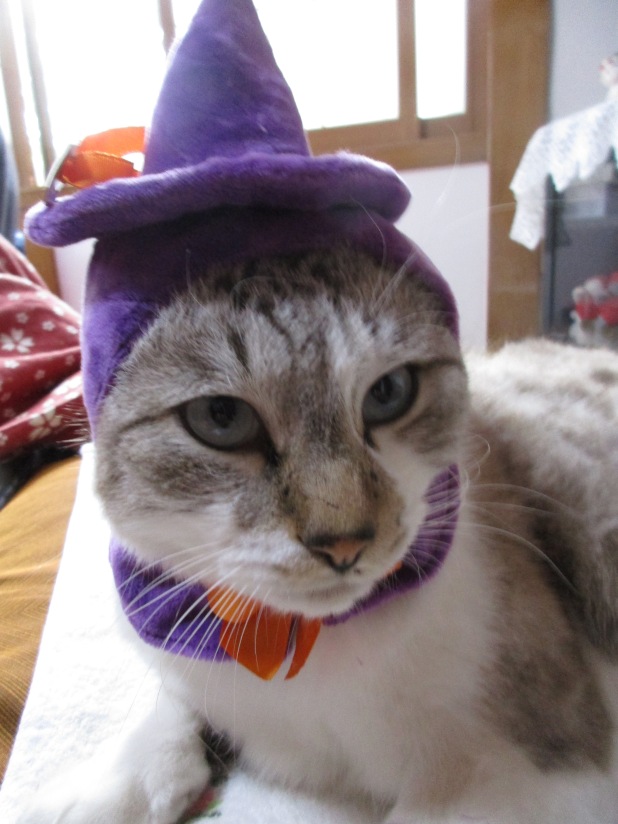 Husband bought Mister Donuts a couple weeks ago for the three of us.

Husband made breakfast for us a week ago…. 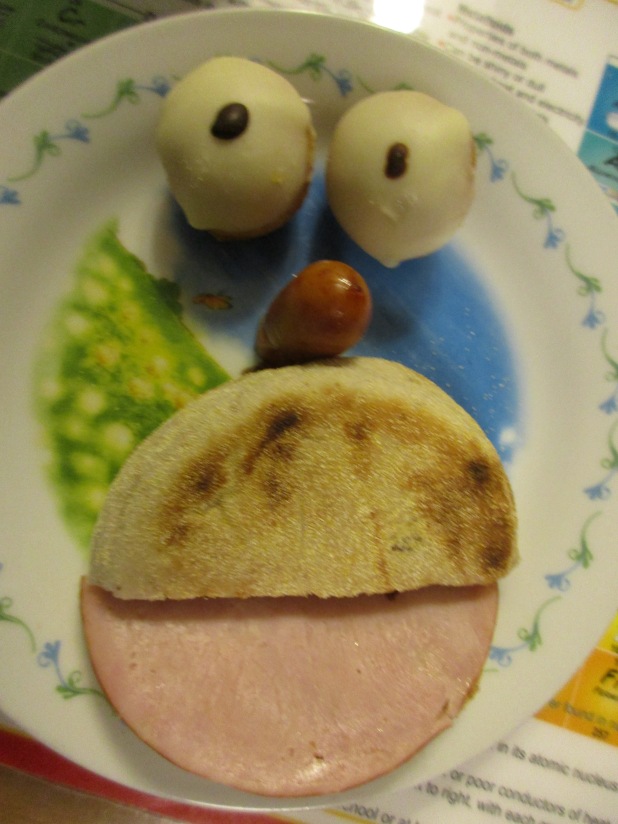 Husband likes being imaginative with food…..

He made this a few days ago…..  (by chopping off one of his own fingers.)

And today (Sunday evening) Yutaka gave me and son this Halloween present…  What’s inside?

This is about as gruesome as a marshmallow can get!

I have a great husband!

Yesterday I posted our superb dinner at the Onsen Hotel YuTagawa. Today I am posting our magnificent breakfast. 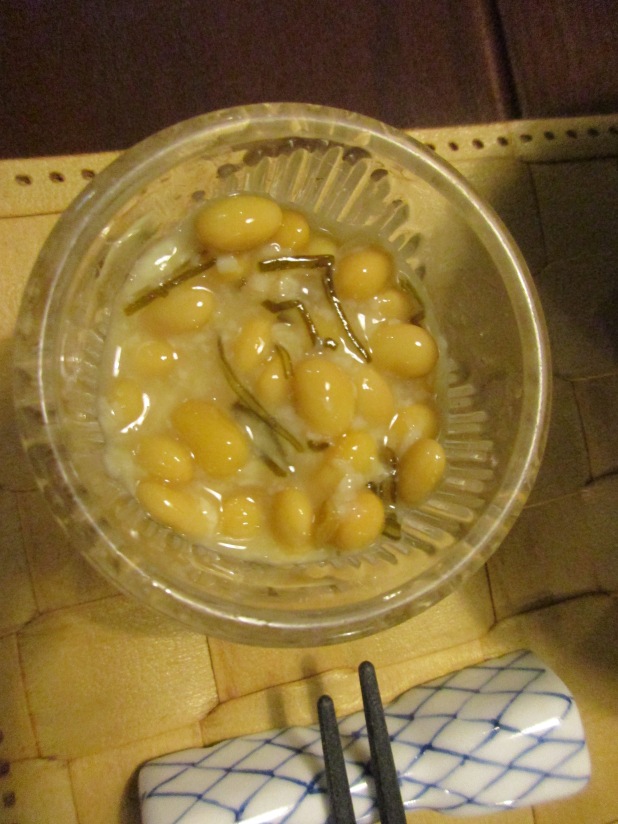 Close-up of the natto. This is something a lot (but not all) of Japanese people like. Some foreigners like it, too. However, it has a strong smell that I do not find pleasing. (Many people do not find it pleasing!) So I’ve eaten one bean of natto to say I’ve tried it, and don’t want to eat more!  I gave my natto to my husband.  He loves natto. It’s one of the things he missed while living in the U.S. (He did manage to find some frozen in an Asian supermarket.) 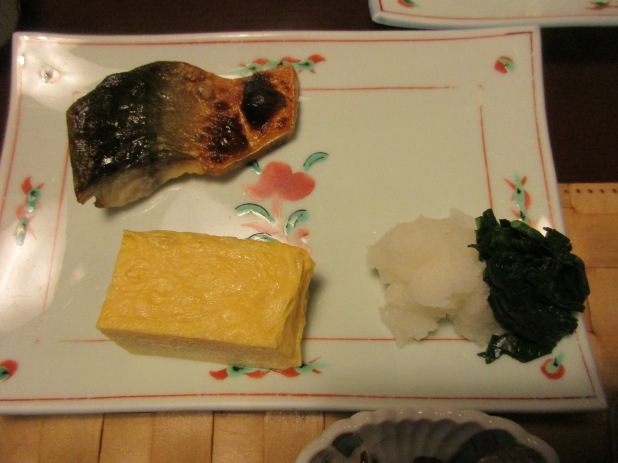 The breakfast even had dessert!  I liked that!  ;^)

These are my last Onsen YuTagawa photos!  I hope you enjoyed them!

It was Jiji’s eightieth birthday, so we had a fantastic dinner the onsen together. (Me, Jiji, Baba, Joe and of course Husband.)

Three generations of Kawamura boys in this photo. I personally think my son looks a lot like Jiji. (The shape of his face.)

Here comes the food….several courses in this meal. I don’t know much about Japanese food, so I won’t explain what’s in the photos. I’ll just show the photos. 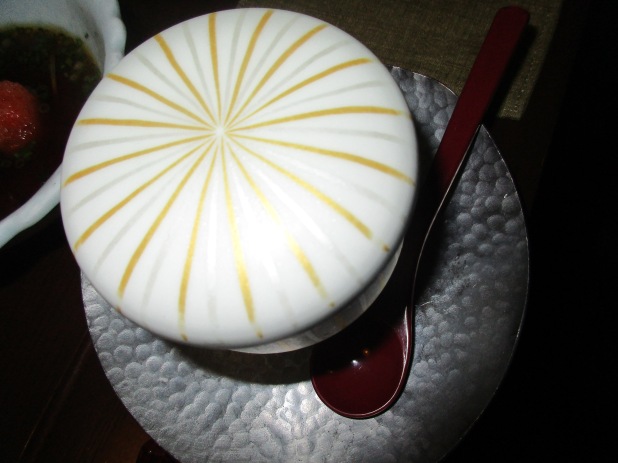 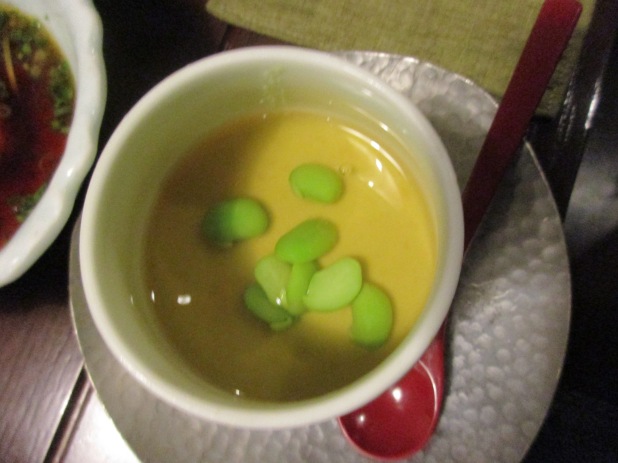 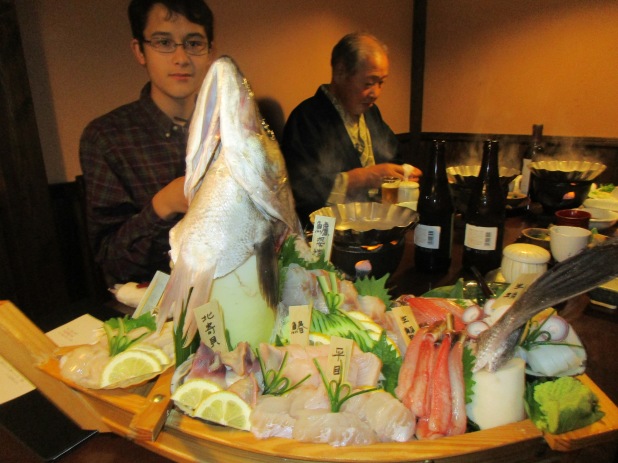 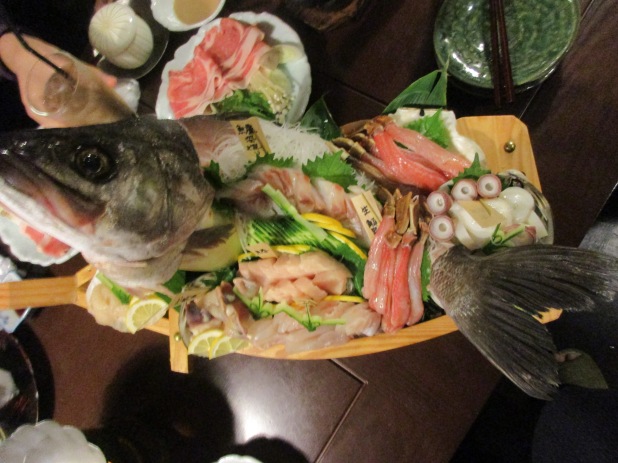 Tsuruoka is near the sea on the west coast of Japan. This region has excellent seafood, naturally.

My fish was pregnant!  See the eggs?

As a woman, and as a non-Japanese person, I was like “Oh, poor momma fishy was preggers!” But I didn’t say that aloud and ruin the ambiance of the meal. 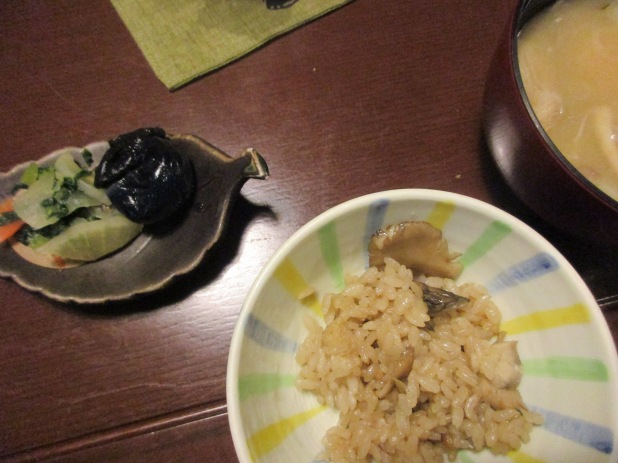 I was full and declined the rice. But the server wanted me to try it because it is special, so this is a small portion. 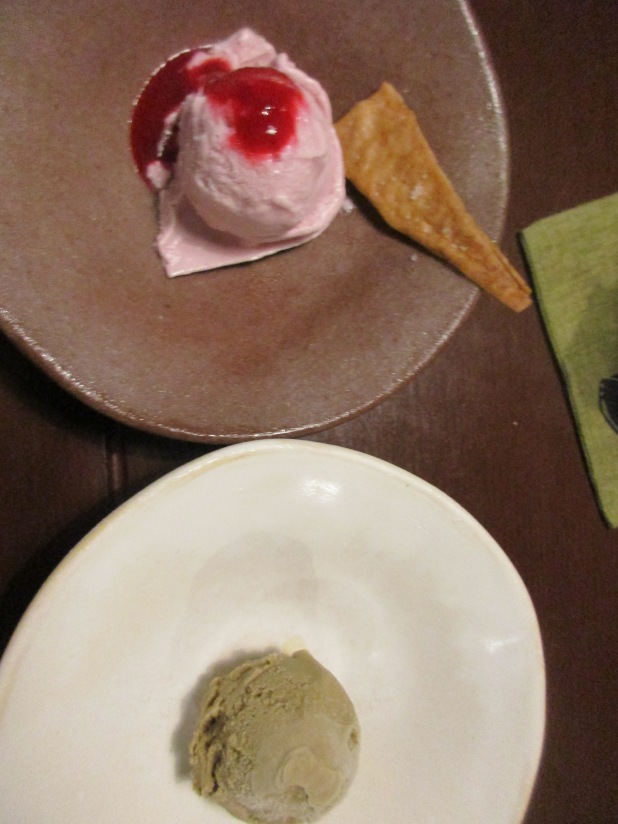 Raspberry and green tea ice cream…..yes, we got both! 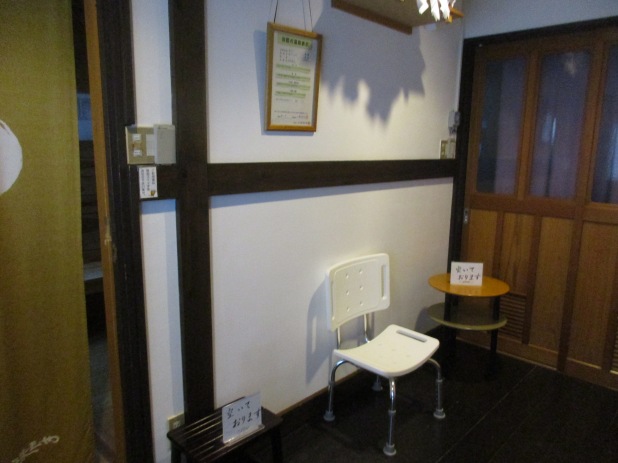 Remember a couple of posts ago when I described the baths here?  They are all private. (Unusual for an onsen.)

The above photos show the doors to two of the three baths in the hotel.

If the bath is empty, you may go in. If it is occupied, you must wait.

This little sign tells you that the bath is currently unoccupied. (Turn it around when you enter. The other side said “Occupied.”)

I’m going in by myself. Such a luxury! Notice my “yukata” (not a kimono.) It’s what people wear in onsen hotels.

Rules about onsen.  (This sign is issued by the Onsen Association of Yamagata.)

By the way, many hot baths in Japan have rules against tattoos…or so I hear. But I personally don’t notice (or pay attention) to signs forbidding tattoos.  I don’t have any tattoos, so it is irrelevant to me. Through the internet, I realized that many foreigners who have tattoos have issues with the “Anti-tattoos rule.”  (The reason tattoos are forbidden is because they are less common in Japan than in countries like the United States. Here in Japan, supposedly only yakuza mobsters get tattoos.)

The water temperature is 104-109 degree Fahrenheit.  Zowie Wowee!  Although my husband said “I know you like this water because it’s not so hot.”

Some onsen water is much hotter.

In an onsen like this, the water comes from the earth itself.   Hot springs are common in Japan, and thus the tradition of bathing sprang up.  (sprang up? Get it? tee hee)

You must wash yourself before getting in the bath. This rule is a biggie.  The bath is not meant to clean you, but to relax you (or warm you up if the weather is cold.)

That’s the hot bath in this particular room.

I poked my head in the other room and that is another bath.  It’s bigger than the other one. I asked permission to take photos, by the way. Usually I don’t do photos in onsen (of course) because naked people are running around.

Sorry. Did I forget to mention that? Everybody is naked. That’s why men and women at regular onsen are divided into different baths. No swimsuits!

People have little white towels that they carry around to cover their private parts. Modesty. But yeah, there’s a lot hanging out. Most onsen-goers are elderly so, um, it’s a good chance to see what the human body looks like as it ages.  (Hint: Droopy.) 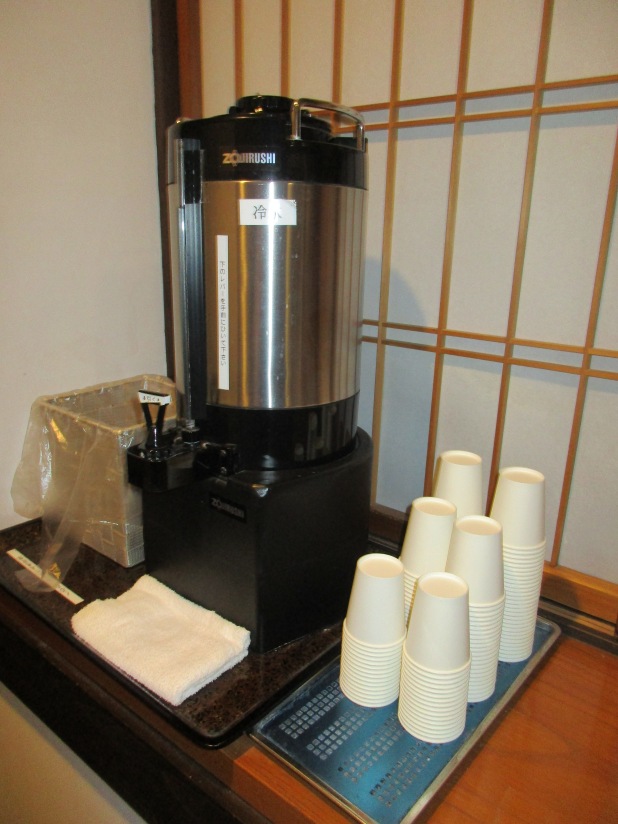 Onsen water is hot, so you need to stay hydrated. Water as we leave!

Yu means “Hot Water.”  (Many onsen have the word yu in their names.)

Since in English, we just say “water” for hot and cold water, I have to catch myself and use the correct word!

A room without a view just isn’t worth staying in, donchya think? 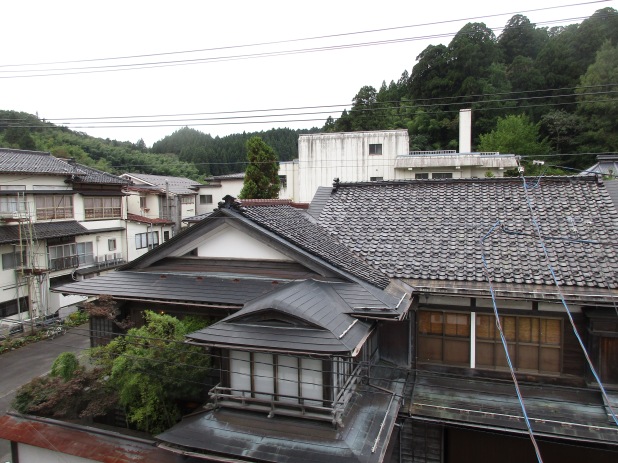 Notice the shingles of the roof. So lovely. 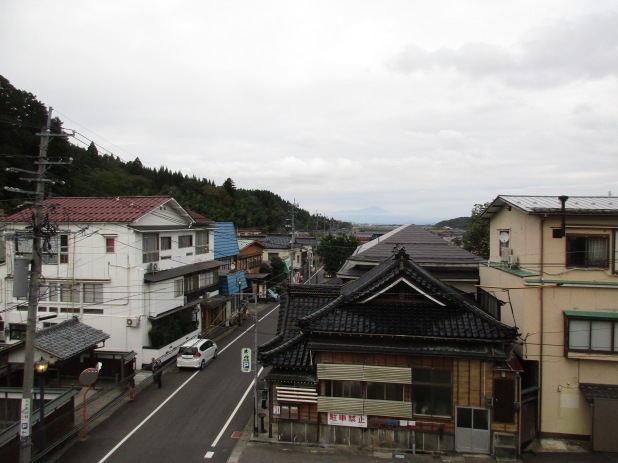 The red sign says, “Amy’s book is awesome. Publish it.”

The hotel said there were no convenience stores or other shops near by.  I didn’t believe her. She was right.

(I didn’t want to actually got to a convenience store. I just wanted to know what was out on the street.)

I love the style of building to the right. Old Japanese buildings are beautiful, but they are getting fewer and fewer as the years go by.

Have you ever seen the animated American TV show “The King of the Hill?” It’s set in Texas, and it’s about a man named Hank Hill. It’s very “Texas.” My family finds it funny because everybody is from Texas, both my dad’s side and my mom’s. Well, I don’t think my dad has ever watched it but I’m sure he’d find it funny if he did.

Anyway, there is an episode where Hank Hill visits Japan.  (I always sort of found this episode sort of racist, but sort of funny.  Oh, so conflicted.)

The family stays in a hotel room that is TINY.

Like the first photo here of MY hotel room at Yutagawa (shared with my husband.) 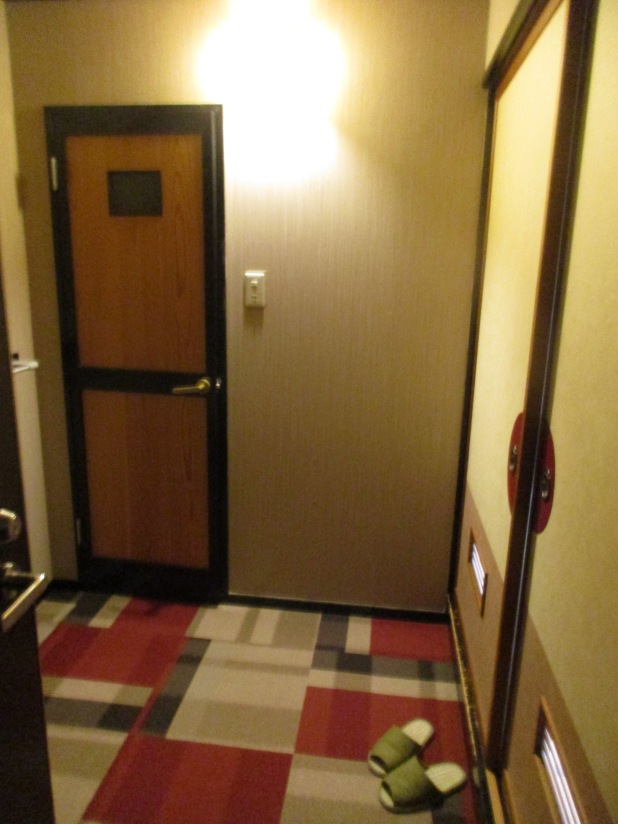 Oooh. Everything in Japan is so eensy weensy. 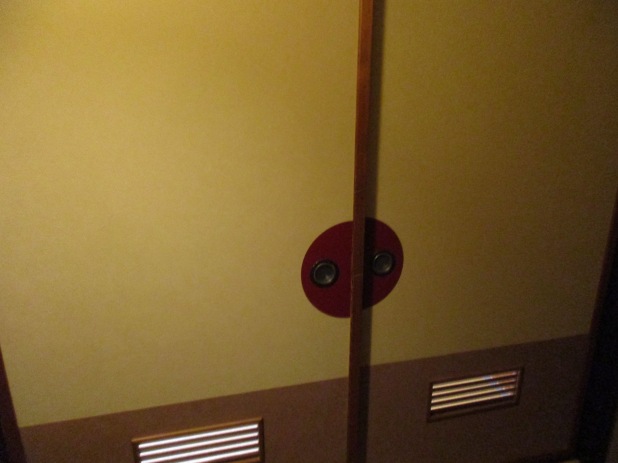 Ha! It’s just the entrance way. Silly us. Here’s the door to the real hotel room.

Not so eensy weensy anymore, are we.

There’s no bed because this is a traditional ryokan-style hotel. When we go to dinner, the staff will come in and move the table and lay out futons for us to sleep on.

Here is the link to the Hank Hill snippet on youtube:

Don’t be embarrassed, Peggy.  I’ve made my share of stupid mistakes in Japan, too.  😉

Well, Typhoon Lan has passed us by here in Fukushima Prefecture, and my family and I are fine. Apparently the nuclear power plant was fine.

Here at my home it’s been heavy rain, which tapered off this morning.  Today was cloudy and a little windy. Like (almost) always after a typhoon passes by, tomorrow’s forecast is sunny.

So anyway, recently we stayed at YuTagawa Onsen in Tsuruoka City in Yamagata Prefecture.

The entrance. The “Maneki Neko” cat beckons in both guests and money. (I can tell because both paws are raised.) 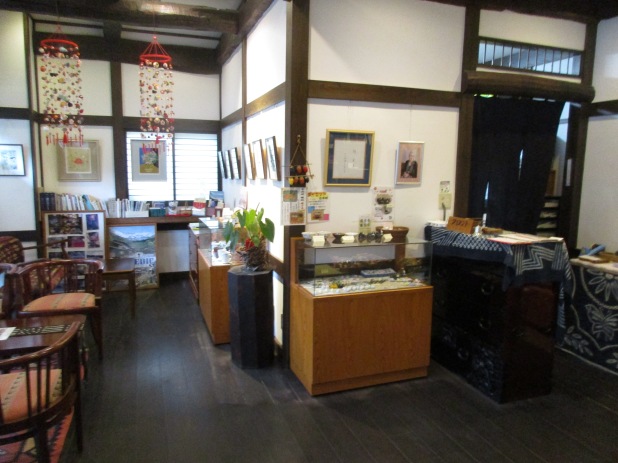 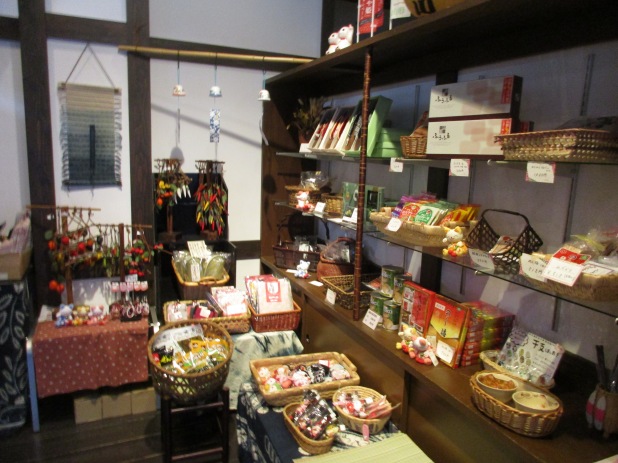 Look! A crane on the cover of the seat cushion in the lobby! It really is TSURU OKA!  (Crane Hill)

The top three hot baths are offered by the hotel.  This is a different sort of onsen hotel—each bath is private.  First come first serve.

Other people don’t come in while you are bathing.  This makes it private.

Most onsen do it the following way: Women bathe in one bath together and men in a different bath. (Not private use. So you are bathing with strange grannies who ask you what country you are from and if you are married and if you can speak Japanese.)

The two bottom baths are at another onsen, but we YuTagawa people may use them. They’re the more typical kind.  Men in one. Women in another.

Whew!  This is confusing! No worry, it’s all legitimate and part of thousands of years of Japanese culture so let’s not get all prudish here.

You may (or may not) have heard on the news that a large typhoon is currently hitting Japan.  This article says: “The (Japan Meteorological) agency issued warnings for heavy rain and flooding on the Pacific side of Japan including the Tokyo metropolitan area, even though the typhoon is likely to be downgraded to Category 3 by Sunday evening, with the activity of a seasonal rain front intensified by the storm. ”

Right now it is Sunday, three p.m.  It’s been constantly drizzling rain all day, not much in the way of winds. Here is a photo from my door:

My son’s school has been cancelled for tomorrow (a Monday.) I expect the main part of the typhoon to hit Fukushima around early tomorrow.

Some people worry about the Daiichi nuclear power plant and its condition when events like this occur.  I’m not at the power plant so I can’t say one way or the other about the condition there.  Where I live, though, everything is fine.  Personally I mostly worry about people further south than me (where the storm will likely hit harder. These storms lose power when they hit land.) I worry about people in poor housing, and people who live near hills and mountains and are in danger of mudslides.  My thoughts are with them.

If you are curious, here are two current photos from of the road (Route 288) that heads out to the nuclear power plant. The photo were taken with a live webcamera, which takes a new photo every few minutes. I’m pretty sure area of the road is not in the exclusion zone. It’s the closest road I could find to the plant itself on a webcam.

Here is the source for these two photos of Route 288, directly above.

Lots of webcams in Fukushima Prefecture.

Here is a link to Tepco’s webcams of the Daiichi nuclear power plant itself.  (Tepco owns the plant.)

If somebody knows of other live webcams which are live near the power plant, please feel free to post links…BUT you must give the source. If it doesn’t have a reputable source….it’s probably fake.

If you are looking at my webcam links during the Japanese night, they will be black! Remember we are in the eastern hemisphere!  😉

In October, my husband’s father celebrated his eightieth birthday. He was born in 1937.  He’s a farmer–not 100% retired yet–and still has quite a lot of energy!

My husband, son and I travelled from Fukushima to the west coast of Yamagata Prefecture.  My husband’s parents live in Sakata City, but my husband wanted to take them to an onsen hotel (hot spring hotel) in the nearby city of Tsuruoka. 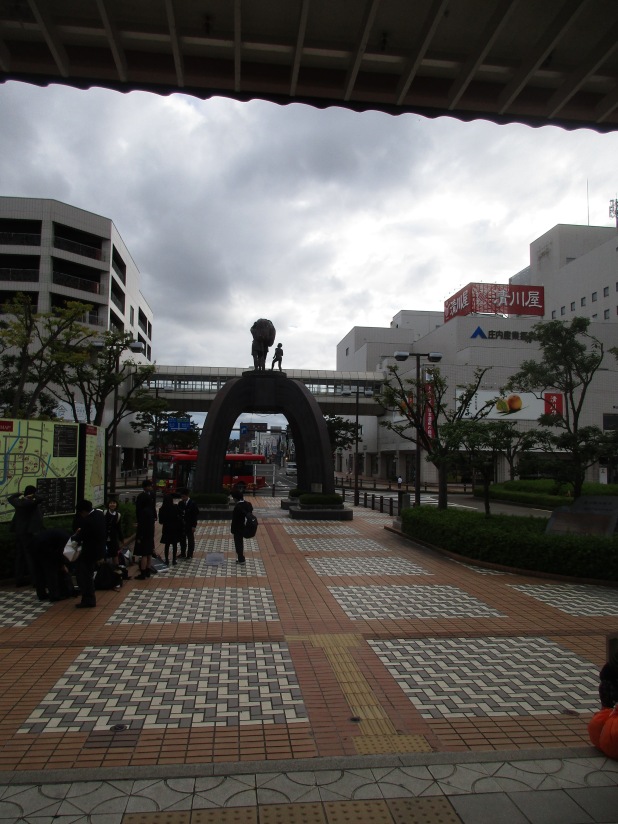 The view from the Tsuruoka City train station. 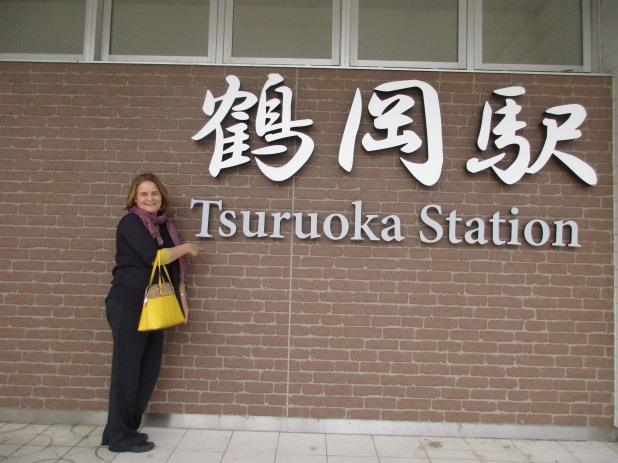 I just love these names!

The souvenir shop across from the train station. Local specialties.

I asked the saleswoman for THE local specialty of Tsuruoka. I was directed to these soybean manju.

Customers can help themselves to one to see how they taste, and then decide whether to buy boxes for friends and family back home.  I bought some for my two Japanese classes.

The soybean mixture inside is sweetened, and it is scrumptious.   I like this sweet soybean better than sweet red bean personally.  Really yummers!