Hey! Hey!  What’s the event?!  Why are so many people gathered at the street near my home?!?!

It’s a parade!  Every spring, the fourth, fifth, and sixth grade elementary school students of Fukushima City march and perform. 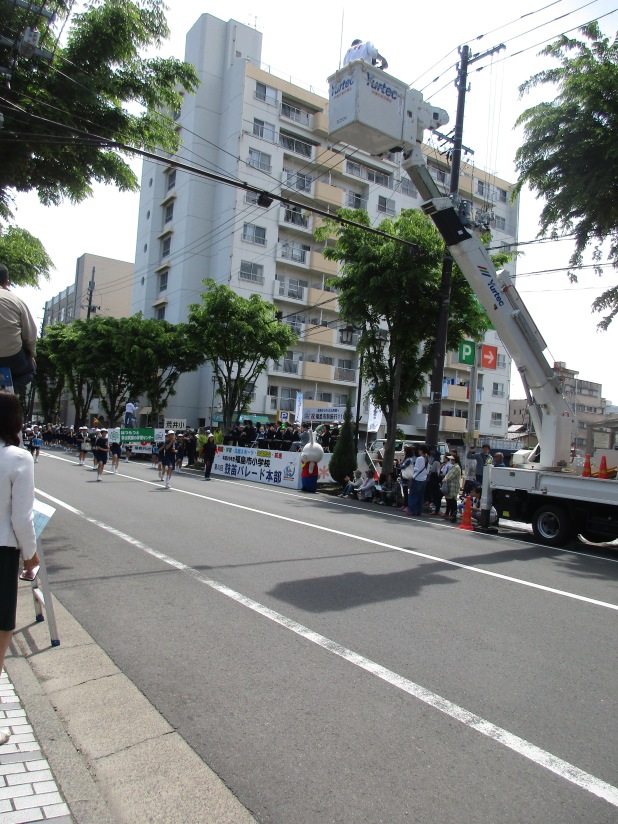 Here they come!  They are divided up by schools.  Each school marches down the street, playing drums, waving flags, and so on.  They’ve been practicing for this day for a long time!

Since it goes school by school, that means that it takes about three hours for the entire parade to finish.  On a warm day like today, that feels like a long time!  (By the way the bucket truck has a cameraperson inside it.)

Congratulations, kids!  You did a good job!

The kids who are now in the fourth, fifth, and sixth grades (in the year 2017) were born in the years 2005, 2006, and 2007.  The Tohoku Earthquake (the big one!) happened in the year 2011.   That means those kids were ages six, five and four, and three at that time.  (Depending on their birthdays.)  So while some of them remember the earthquake, probably some of them don’t.

What’s the first really big event YOU can remember?  For me, probably I remember the ruckus of Watergate and how Nixon was a bad guy.   I remember that the war of the United States and Vietnam was over, and that was a good thing.   I remember how 1976 was the bicentennial year for the United States, and everything was red, white, and blue!  Yes, I was a seventies child….  (Did you guess?)