According to recent news, there was a “cloud of mysterious radioactive material” over Europe in October. (It has since dissipated and supposedly is not harmful to people in Europe.) Scientists don’t know where it is from, but think it is from the east.  So from somewhere in the area of Russia.

I think what is most worrisome to me is the secrecy. Somebody in Russia (or Kazakhstan or in that area) knows what is going on, but isn’t telling.

If nuclear energy (or nuclear medicine, in this possible scenario) is to be considered “safe,” then we have to do away with the secrecy. And will that ever happen?  No way.  Not with secretive countries and companies in existence.  A country or company can release radiaoctive materials accidentally and then can say to itself: “Well, we know they world will get so MAD at us for this stupid mistake, so let’s just not tell anybody what happened…….”  People outside country insiders or the company insiders may not know for years what really happened, or may NEVER know. 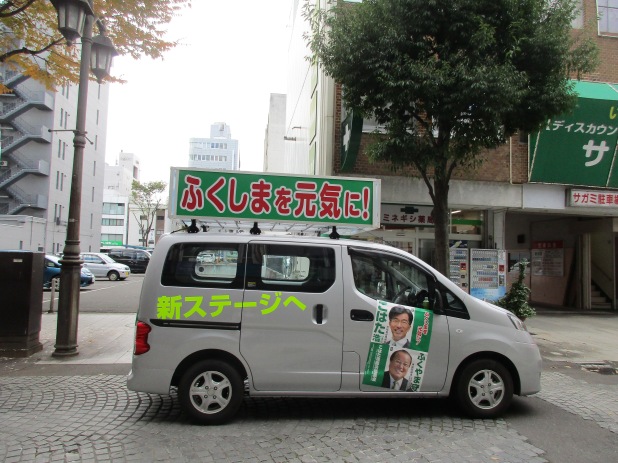 This photo is unrelated (except tangentially) to the above news story.  It’s a politician’s vehicle and the sign at top says: “Fukushima o genki ni!”  “Let’s help Fukushima recover!”

I took this photo yesterday in downtown Fukushima City.

Years after the accident Fukushima is still trying to recover……………………..