Years ago I was young, skinny and beautiful (YES I WAS BEAUTIFUL! WE ARE ALL BEAUTIFUL!) and I worked for the JET Programme, a government-run organization that places Americans (and other nationalities) in schools across Japan. I was placed in Matsuo Town, Chiba Prefecture. Matsuo was a very small town, so small in fact that it no longer exists. It got swallowed by a larger town.

So, as I was saying in my previous post, in 1997 I tagged along with the third year students on their field trip up to Fukushima Prefecture. I didn’t know anything at all about Fukushima, but the teachers reassured me it was beautiful (SEE! WE ARE ALL BEAUTIFUL!) and historic.

I really enjoyed the trip. By the way, back then, digital cameras were a very, very new thing and I did not have one. (I did not even know what they were, having never seen one.) So these are paper and ink photos from my album.

The above photo shows AizuWakamatsu’s castle. I don’t remember going there, but I guess I did (and with a gaggle of students.)

Here was the camping area we stayed at. I do remember this. It was at the area of Goshiki Numa, and I thought the lakes were lovely. Plus their name is so neat: “Five color swamps”

You can see the scenery in the photos. 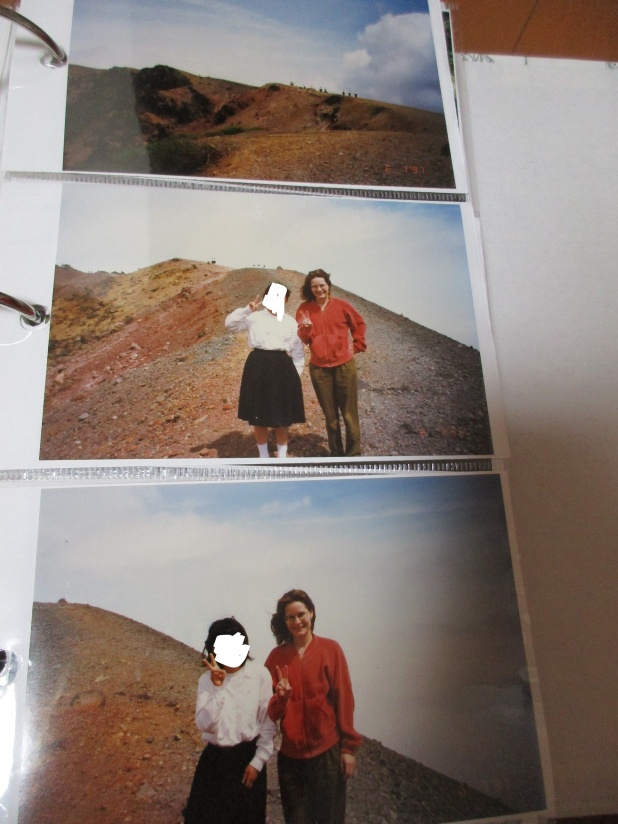 I also very much remember this. A bus took us to the top of Bandai Mountain, which is a volcano that exploded in 1888. But it is now considered dormant. So the students, teachers, the guide and I all stood on the rim of the volcano. I thought it was so cool. You can look down into the funnel into the middle—it wasn’t smoking or fiery. It was just dirt.

Once we got up there, I was a little nervous about being so close to a volcano. And knowing what I know now, I was right to be fearful! Mt. Bandai does not explode nowadays………but there’s always the chance.

Still at the top of the mountain. I wanted to show this photo…the girls having so much fun. I have more photos like this.  Fun times in Japan.

I think with the advent of the internet and digital cameras, the JET Programme no longer allows the foreign teachers to photograph the students.  Nobody wants to have embarrassing photos on the internet!  I think in my case it’s all right–I was allowed to take photos, and I blotted out the students’ faces.  By the way, these students (who are fifteen years old in the photo) are currently thirty-five years old!!!!!!!!!