When I first came to Japan in the nineties, I taught English through a governnment program called the JET Programme. The JET Programme sends foreigners to public schools all over Japan. I was placed in a public junior high school in the countryside of Chiba Prefecture.

IF YOU ANSWERED TOKYO, YOU ARE WRONG!

It is actually located in Chiba Prefecture.

(Chiba Prefecture is east of Tokyo. It’s home to Disneyland and Disneysea. It’s also home to what was officially named New Tokyo International Airport, but nobody called it that because it’s in Narita, which is in Chiba Prefecture.)

Below is a photo of me with some of my students. I didn’t usually wear a suit, but it was the day of graduation.

My home there was also under the flight path for Narita Airport. If you’re flying from the east to Narita Airport and you look down and see the coast, that’s Chiba Prefecture. And as you descend to the airport, you can see the buildings, fields, roads below. That’s where I lived. Like I said, it’s a rural area. But it’s a great location: near Tokyo, near Disneyland, near the airport, near the beach!

Looking out at the sea from Chiba Prefecture.

Today it is Sunday afternoon, September 14, 2019. A week ago, a typhoon hit Chiba (and Tokyo and Yokohama. But sticking out into the ocean the way it does, I think Chiba may have gotten the worst of the storm.)

The storm caused many trees to fall in that rural area. Those heavy trees hit power lines and caused severe power outages in many parts of Chiba Prefecture. 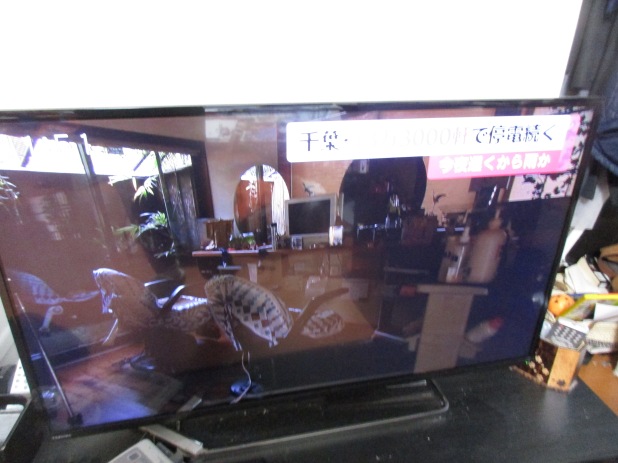 And still today, Sunday and also a full week after the storm, electricity is out in parts of Chiba Prefecture. The two above photos are taken off my TV (Japanese news.) The bottom shows a business. Not only is it hard to live daily life without electricity, but businesses can’t run, either.

It’s been hard for these poor people!

I hope things get back on track for Chiba Prefecture soon. (Meaning: Immediately!)

I know the island countries near Florida also were hit by a hurricane, and have it much worse than Chiba Precture. Many people have been killed due to Hurricane Dorian.