As I have posted before, I am a library volunteer for my son’s former elementary school. We go to the school, once a week and read a book (usually a picture book) to either one or two classes. (It is a small school.  Each grade has only one class.)

I choose one book per semester, and this semester I chose a book called “Say Hello” by Jack and Michael Foreman.

I had never heard of this book, but I was in the library here in Fukushima City, and saw the Japanese version on the shelf.  (One of the shelves where the book covers face out.)

Like I do with many books, I picked it up, and skimmed it.  I loved it.  I love the simplicity of the language (which I look for in my read-aloud books in English for Japanese kids). I loved that the kid had black hair, and could possibly be Asian. I loved the message–helping kids fit into groups. It’s the kind of message that is good for wee little kids, but also fifth graders and sixth graders can benefit from this message. It’s not a babyish book. 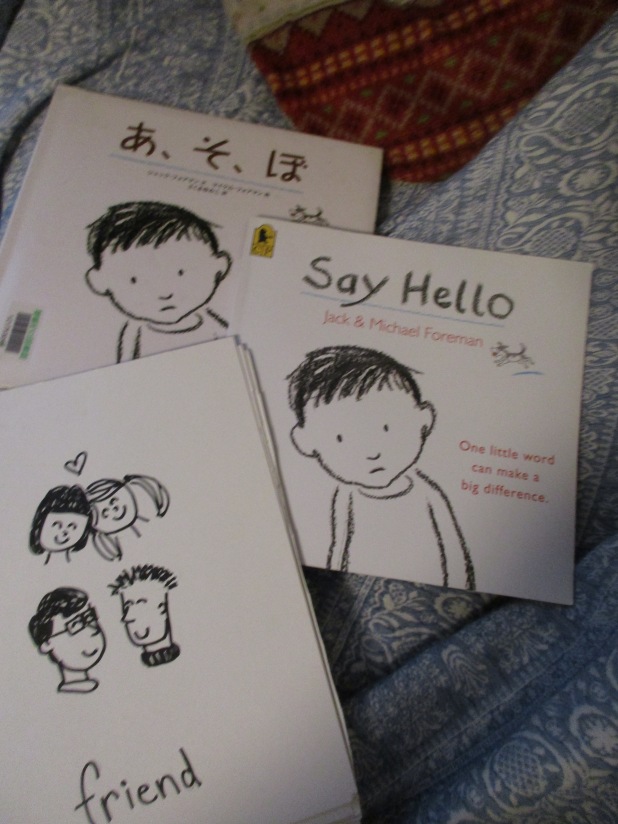 The Japanese title is “A So Bo” meaning “Let’s Play.” COMPLETELY different than the English title of “Say Hello.” (In fact, there are little translation differences throughout the entire book.)

I started the Reading Aloud by showing both copies of the books, and explaining that the titles were different, but it was basically the same book. And I translated “Say Hello” for them. (Konnichiwa Iinasai.)

Why do the publishers totally change the titles of books upon translations? (And this is often done with movies, too.)

Not being a publisher, I don’t really know, I can only guess.

One reason is that perhaps the original title is already taken.  If you have a popular book with a certain title, you are certainly not going to bring in another book with the same exact title. Confusing!

Another reason is that the English (or other language) title just doesn’t sound good enough in Japanese.  It sounds harsh, stupid, confusing, whatever. But if it is deemed to sound great, it will be kept.

For example: The moie Big Hero 6 is called Baymax in Japan.  I actually prefer the title Baymax and use this title myself!  Big Hero 6 is too hard to remember. (Super Hero 7??? Cool Hero 5??? What was the name of that movie anyway?)

Inside Out is called Inside Head in Japan. And yes, I like the American title better!  But it was confusing for me because I thought it was actually named Inside Head in English, and then in America people were talking about Inside Out.  It took me a couple of moments to realize they are the same movie.

Frozen is called Anna and the Snow Queen in Japan. I far prefer the Japanese name—-but I know why it was named Frozen in the United States.  They wanted boys as well as girls to see it, so they chose a gender neutral name.  My son enjoyed this movie, but I have to admit he would not want to see a movie with the name “Anna and the Snow Queen.”   (He hates princess type stuff.)