The first day of spring–traditionally–in Japan is February 4th.  Winter is considered over, and new life is starting. Maybe we can’t see the new life-it’s there budding deep in the earth, below the snow. The snow will soon melt to make way for this new life to flourish.

However, the day BEFORE February 4th is–traditionally–the last day of winter. Setsubun is on February 3rd, and Japanese people ritualistically cleanse their homes of evil spirits.

This mask is a mask for Setsubun–it’s an oni. “Oni” is a word that can NOT be accurately translated into English.  Often it is translated as “devil” but if you are thinking of Satan, well, it’s not the same.

The “Oni” is also a monster of sorts–like a troll. It appears in fairy tales, and makes those fairy tales difficult to translate into English, because westerners don’t know the concept of “oni.” Even though Japanese people understand European-based fairy tales (they are popular here), the majority of Americans do not understand (nor read) Japanese-based fairy tales.

These photos were actually taken on February 3rd last year (2017.) I saved them to show you this year.

A new tradition in Japan is to eat these rolled sushi on Setsubun Day. The tradition comes from down south (the Kansai area, where Osaka is). My husband doesn’t follow this tradition because he is not from Kansai. (He is from Tohoku.) However, stores all over Japan have picked up on the tradition of eating this sushi on February 3rd…and nowadays people in Tohoku eat them. (Except my stubborn husband.) 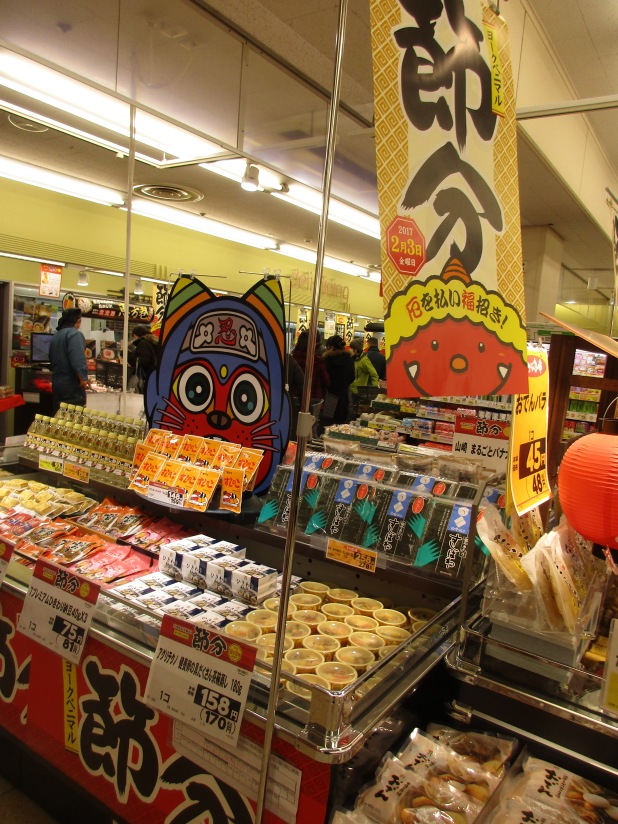 You can see from the store displays, that even though an oni is involved in Setsubun, it’s a cute oni. An frequntly has a horn or two and fluffy hair–blue or black or red or green or yellow. 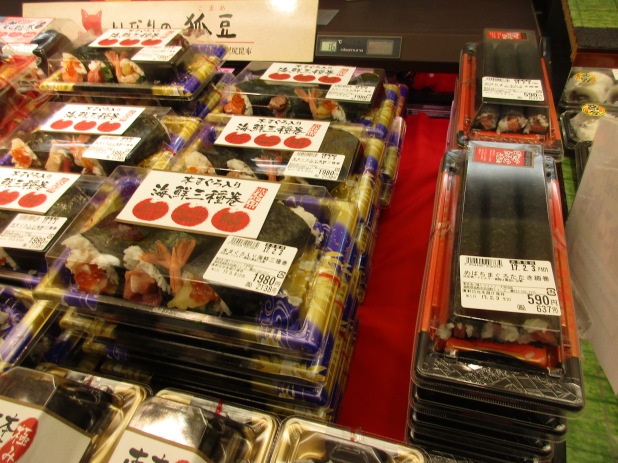 The sushi for setsubun, called “ehoumaki.”

Ehoumaki sushi is big and fat, and you are supposed to eat it without talking, while facing a certain direction. (The direction changes every year.)

The store normally does NOT have ehoumaki for sale like this! This is for Setsubun…they know that many moms and dads will purchase them. KACH-ing! (The sound of a cash register.)

Some people also make the sushi at home.

The paper masks are free. I think you have to buy beans or peanuts? But I think nobody really cares if you just grab one.

illustration taken with permission from irasutoya.com

If you want to make your own Oni mask, then you can watch this video that shows one way of making the mask–from a tissue box. It’s in Japanese, but you can figure it out by watching it.