I wanted to write about Fukushima and when I first began, I was going through dictionaries looking for names of my characters. (They are all Japanese and therefore must make sense as names to Japanese people.)

The first names I came upon were the names of two women. They are Japanese women, but in my writing I translated their names into English, and in Japanese, their names make a clever pun. (If I do say so myself.) While writing, I CONSTANTLY asked myself, “If this were translated in Japanese, how would it be translated? What would it sound like to Japanese ears?

So I found the two women’s names first, and I love their names. Their names began the book, and the feel of the book. (This book is not yet published.)

Next, I needed the names of my main characters. Combing throught my dictionaries, I decided on Haruka from my female protagonist and Tsubasa for her younger brother.

One reason is because both these two names are currently very much in use. Go to any school in Japan, and you’ll likely find a Tsubasa or a Haruka (or possibly both.)

Haruka was chosen for its meaning: Far Away. I imagined that for kids in America, Fukushima is “far away.” Thus for this reason (and other reasons) became Haruka’s name.

Tsubasa’s name means “wing.” My feeling was flying. I’m not as attached to his name as to Haruka’s. In fact, I’ve thought about changing it something else.  But obviously I must still like it, because I’ve never changed it.

So WHY did I type all that out? Well, bullet trains (shinkansen) all have names. The one we take to get to the proximity of my husband’s hometown is called “Tsubasa.” 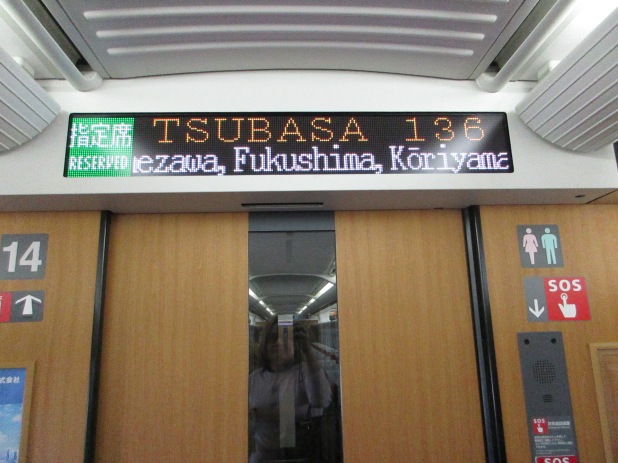 For more info about the bullet trains: