I am now back in Fukushima City after visiting my parents’ home in Texas. It was a great trip! I am very indebted to my cousin’s wife who took my son to Houston for fun and adventure. She’s a sweetheart! Probably the nicest person I know.

Okay, anyway, we flew out of Tokyo’s Haneda Airport. But we flew back into a different airport when we returned!

So I’m warning you: Nowadays it seems that both Haneda Airport and Narita Airport are used for flights to the U.S. Your ticket may just say “Tokyo.” (Since Narita is assumed to be Tokyo’s airport, although it is actually outside of Tokyo.)

This terminal of Haneda is wonderfully done in a reconstruction of old-fashioned Japan. Really nicely decorated!

Even the ceiling is stylish.

Son and I got lunch from this Turkish sandwich joint. They don’t have this chain in Fukushima city (or anything like it) so it was a nice treat.

Inside a souvenir shop. Souvenirs are a huge part of Japanese culture.

The Kit Kat section. I know flavored Kit Kats have become famous around the world (due to the internet), but this souvenir shop has WAY more available than I can buy in Fukushima City. I can get regular chocolate, dark chocolate, and maybe two other flavors here in Fukushima City. (The flavors change with the seasons. This seasonal change is very common in Japan. What’s available in spring will often not be available in autumn.)

On right: As you can read, wasabi flavor

Not for me, no thanks! 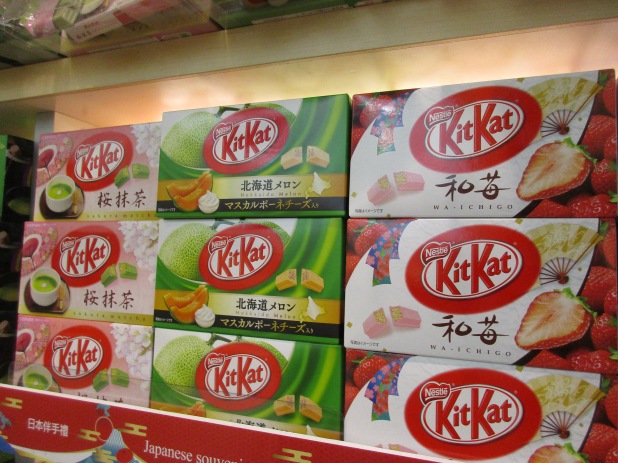 (Actually it’s wa ichigo–Japanese strawberry. I think pretty much the same though as strawberries in other countries! LOL) 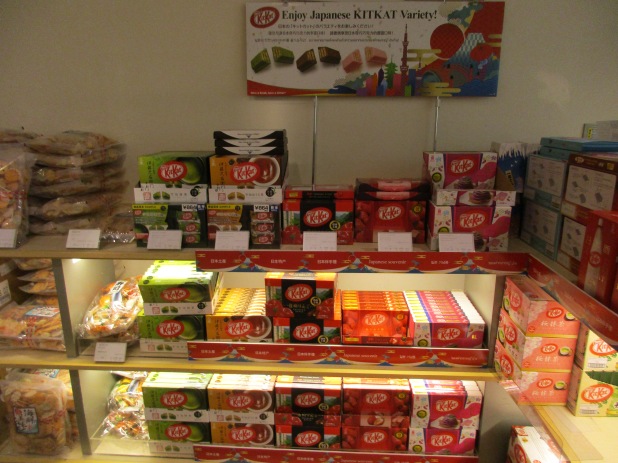 Oh jiminy. If my ten-year-old self could see the future, she would be very pleased.

I’d like a job thinking up flavors. That would be super cool.

I bought the Koala March cookies in the photo for my son years ago. They are “Tokyo” themed which was neat. Each little cookie had a koala at some Tokyo landmark. I don’t personally like the taste of Koala March, though.

Strolling around. Haneda is a nice place–and it’s just an airport.

Actually I saw some European people getting in trouble for filming (they were youtubers, maybe?)

The security was scolding them and the Europeans were apologizing.

(When I photographed inside the souvenir shop and the Turkish sandwich restaurant, I asked and received permission.)

You may not be aware, but a few months ago, an American youtuber named Pogan Laul visited Japan to film for his youtube channel and was VERY VERY VERY VERY VERY VERY obnoxious as he filmed the videos, and extremely disrepectful. So I suspect that security in many places in Japan has clamped down on people who are filming.  Thanks Pogan Laul for ruining it for everybody.

I’ve heard people say they worry about visiting a country like Japan because they don’t want to be unintentionally disrepectful. If you behave in a nice manner, Japanese people will forgive you if you make a mistake. But if you have come to Japan to mistreat people intentionally, then no, nobody likes that and it is considered–by everybody in the world–to be very rude.