I was reading twitter yesterday and saw an article posted by anti-nuclear campaigner Reinhold Uhrig. The article was about a new statue in Fukushima City.

The statue is located near the train station, and it is in front of the Comu Comu Building. (Comu Comu is a large center for kids’ activities: library, museum, play area, planetarium, science rooms)

I wanted to see the statue for myself so I headed there for my morning walk. (It is about fifteen minutes away on foot from my house.) The statue was MUCH larger than I expected!

Me in front of the statue early this morning.

Personally I like the statue. Why? It’s art. I asked my husband and he said the same thing, that he likes it because it is interesting art.

The news article I read said that lots of Fukushimers don’t like it because it makes Fukushima appear as if it is still unsafe to live in.

You can read the article:

I asked my husband and he said SOME people don’t like it. (Some people do.)

To tell the truth, though, am I only one who thinks it resembles Kip’s Big Boy?

Anyway, jokes aside, I am sort of conflicted, even thought I like the statue itself.

Conflict #1: It is place in front of a building that is devoted to fun activities for children who live here in Fukushima. This building had been newly built when I arrived in 2006, and I took my son there regularly. (It’s free.) First we went to the play area, then later to the kids’ computer lab and to the extremely wonderful science activities. (The center has a definite slant towards science.) It’s simply a wonderful, wonderful place for kids and their parents.  So what must kids think when they pass by? Does Fukushima’s Big Boy scare them? I don’t want it to scare wee little ones. The art is meant for adults, not children. Perhaps the Culture Center or the Fukushima Prefectural Art Museum would have been a better location for it.

Conflict #2: The statue strikes me as a little touristy. I don’t know that it is meant to bring hope to people here (it doesn’t bring me hope! It looks scary!) I think it is built for outsiders, for them to take photos of and pass around on the internet and write articles about. (Exactly what I am doing, although I don’t consider myself an outsider.) But maybe this is good because it gets outsiders talking about the situation here.

Anyway, those are my feelings. 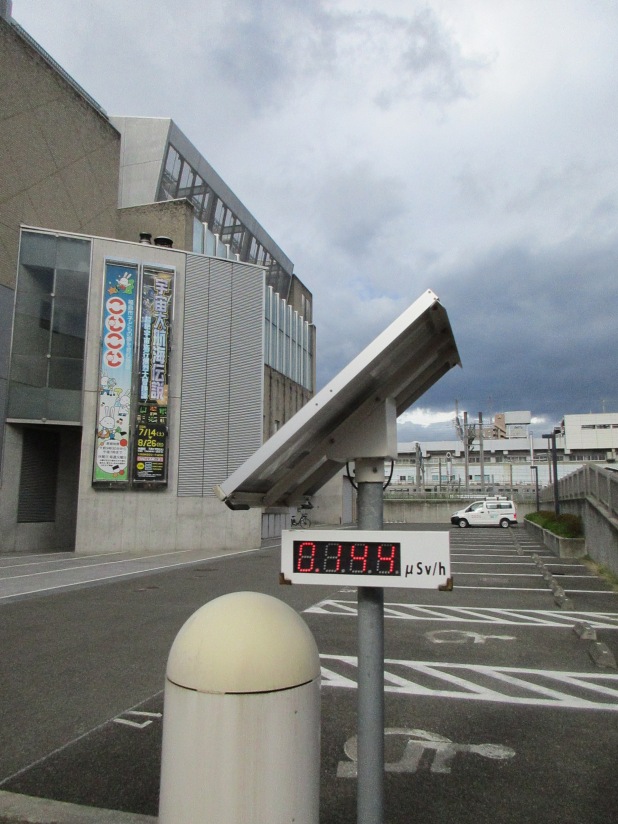 The radiation detector next to Comu Comu says .144 usv/h. The statue is misleading because the radiation level has never been .000 here, and from what I have researched, naturally, the radiation level is higher than .000 everywhere in the world. (There’s a small natural amount everywhere.) So the goal of getting it down to .000 in Fukushima is automatically unattainable. Currently the radiation is believed to be at a safe level in most parts of Fukushima Prefecture. (With the exception being the area around the nuclear power plant.)