I am a library volunteer at my son’s former elementary school.   A couple weeks ago, I received a phone call requesting me to read a book to the fifth and sixth grade classes.

Because they are older kids (ages ten to twelve), I wanted to do a picture book appropriate for older children, a book that makes readers think.

I decided to do Maurice Sendak’s Outside Over There.   It’s a slighly creepy story about a girl named Ida who must watch over her baby sister, but when she is not looking, her sister is stolen by goblins!   So Ida must climb through the window to rescue her sister from being the bride in a marriage to a goblin. 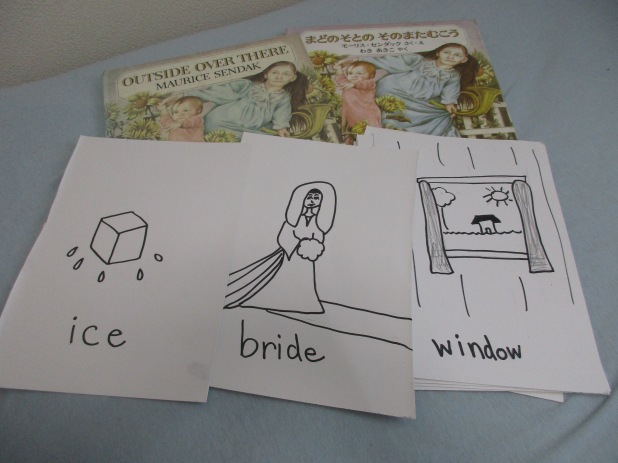 First I teach the words in the flashcards that I made, and then I read the book in English while a Japanese volunteer reads it in Japanese.

Ida reminds me of the character I created in my own manuscript.  Haruka is also an older sister who feels she must be responsible and take care of her younger sibling, and also feels a bit responsible for the adults in her lives, too.   Like Ida, she is a serious sort of girl who is so busy being mature that she has little time for frivolity.

I have noticed that in disaster stories the main characters are often either only children or oldest children.

Hatchet by Gary Paulsen (a plane crash)–an only child

Dust of Eden by Mariko Nagai (internment of Japanese-Americans)–youngest child! (main character is the younger daughter with an older brother.)

You know what else is REALLY interesting?  In books where it is an only child, it is a male child.  (Except one book, Ninth Ward.)

So why did I choose an older sister/younger brother combination?  First, I did not base Haruka off myself.  I myself am a younger sibling, and about as serious and mature as a pinata.

I think that perhaps people naturally think of females as caretakers….and I guess fell into this trap, too?    (Even though when I was a kid–and I am a female–I was not a caretaker!)

As a writer, though, I felt that if my protagonist has a younger sibling, then she has somebody to converse with.  Further, the younger brother provides a bit of comic relief–a necessity because Haruka is so mature and serious.

Why did I make the younger sibling male?  Well, that’s easy….  I have a son!  While the boy in my manuscript isn’t that similar to my son, I find it easy to know how (some) boys think since I am constantly around a boy nowadays.