William McMichael  is a Canadian of Japanese descent.  I’ve known him for a few years, and he’s a super nice and hardworking guy.  He obviously loves Fukushima.   I met him when he was a CIR here, but now he works at the Faculty of Economics and Business Administration, Fukushima University,

Anyway, he organized a Fukushima foreigners’ round table discussion a few weeks ago, and I was invited.  There was a Japanese researcher there who explained things and answered our questions.  (My husband told me this Japanese researcher is famous, but sorry, I forget his name….)  Anyhoo, it was all extremely interesting, and I appreciate the opportunity.

So moving on.  Willam McMichael recently asked foreigners who live in Fukushima to write a question and then take a photo of ourselves holding the question up.   For his project, I suppose?

I thought about my question, the number one thing I wanted to know.   Here it is: 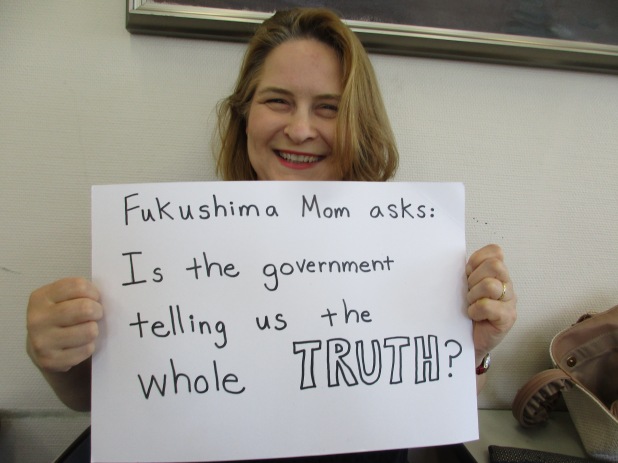 I discussed the wording and so forth with my Japanese teacher, Sagi Sensei.  And we ended up nixing this photo because I  look too happy. 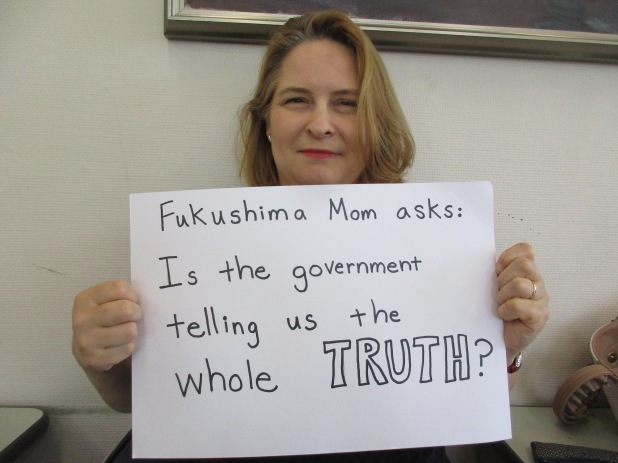 How did I choose THIS QUESTION?

People write these things, but they never ever back it up.  And plus people on the internet have posted a photo of the nuclear power plant in flames…but it’s actually a photo taken in Chiba Prefecture.   (And it’s definitely NOT a nuclear power plant.)  Or they will post an icky looking fish, and say its disease is caused by radiation…but a little research will tell us that the photo was actually taken BEFORE March 11, 2011 and therefore the fish’s disease can in no way be related to radiation.

So all this leaves me wondering what is true, what isn’t.  It is one of the reasons I try to make this blog unbiased.  People will try to sway you, but if their facts are faulty….well, think for yourself.

I don’t actually believe that the goverment is telling us the whole truth.  I am not naive.

I don’t expect an answer to the question in the photo.  It’s a question to make people think.  Not to be answered–because there is no answer.

If the government is lying us, they will not say, “Gosh, darn it,  you are right.  We are lying.”

So let’s keep us eyes and ears open for the truth.   In this age of fake news and government misdeeds, it’s a good skill to be able to discern fact from fiction.