I live in my own little world in downtown Fukushima City.  Train tracks on one side, Mt. Shinobu (a low mountain) to another side, a river on that side….  I don’t often leave the downtown area.  But sometimes I get the urge….  You know, the urge to SHOP.

The downtown area doesn’t have many large (in terms of space) stores, since space is confined.  But once you leave the downtown area, there is much more space and the larger stores tend to be out there.  (And then once you leave THAT area, you get into the countryside, home of bears, monkeys and wild boars.)  Unlike Tokyo, Fukushima City is fortunate in that it has a lot of space.  It’s one of the perks of living in Tohoku.

I headed south on route 4.    This road heads to Koriyama City–but I won’t be going that far!  That’s fifty minutes away by regular train.   (About fifteen minutes by bullet train.)

I am just going to do a bit of shopping in the south part of Fukushima City. 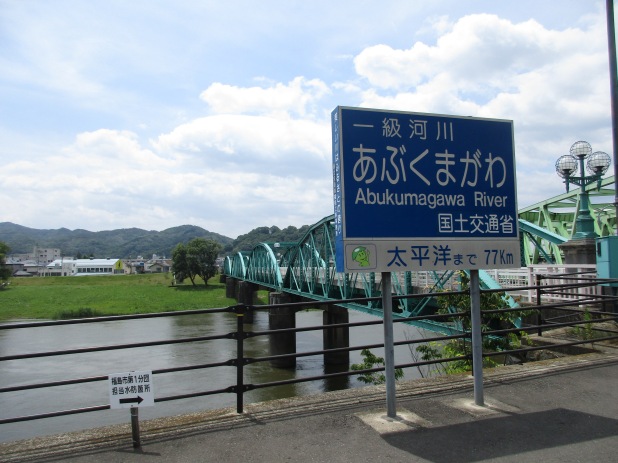 I am going to cross this river! 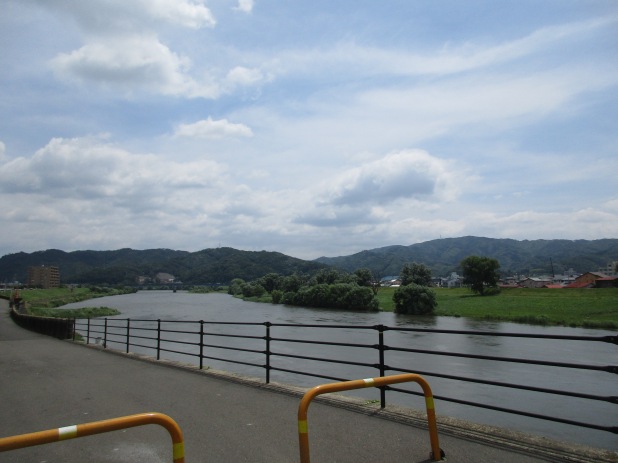 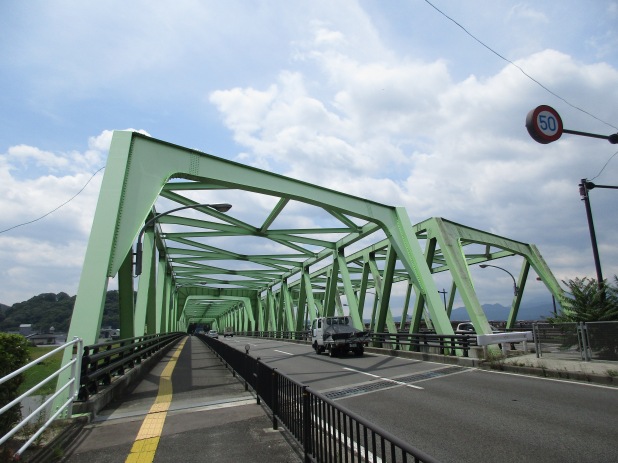 Okay, here is the bridge.  (This is just one of the bridges that cross this river.  It’s not the only bridge!)

As you can see there is a bike and pedestrian path along it on both sides–very convenient.  Japan tends to think about the needs of cyclists and pedestrians more than the U.S.   (But probably not much as the Netherlands, cycle capital of the world!)

We’ve crossed the bridge.  This is a new neighborhood for us.  I’ll have to remember what I see, like To Think that I Saw It on Mulberry Street.

This low mountain has a hiking trail.   The sign notifies you of the bicycle parking area, which is next to me, but not shown in the photo.  I want to go shopping though…so no time for hiking!

Namie, Iitate–those little towns to the east were the ones most affected by the nuclear disaster resulting from 3/11.  People had to evacuate those towns, whether they wanted to or not. 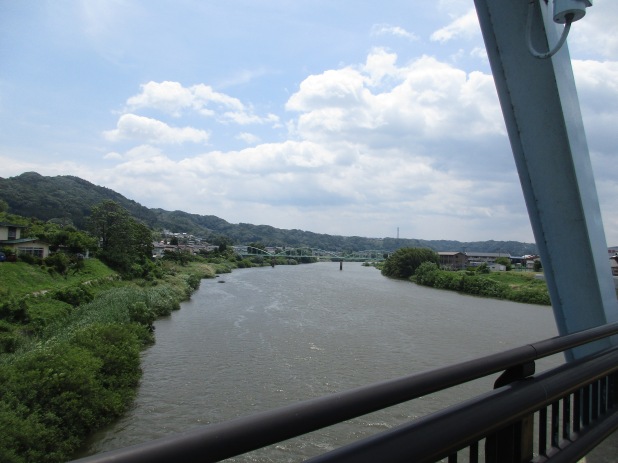 In case you forgot that this is Japan….karaoke. 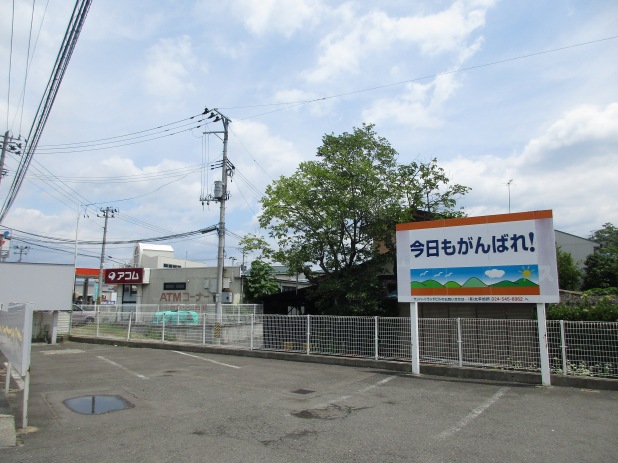 I liked this sign!  Kyou mo Ganbare!  Let’s do our best today, too!

(usually the verb form is ganbaru (casual) or ganbarimasu (formal))

Ganbaru is a word that has a nuance that can not be translated into English.  But it is often translated as persevere.  (Which sounds extremely formal and rigid, so it often gets translate into do one’s best.)  Without a doubt, this word is the favorite word of Japanese people.   (Except for those who hate it.)

What an interesting building!  I really don’t see many buildings like this.

The same building from the front.  Built perhaps when Japanese architecture was beautiful, but non-earthquake-proof???? 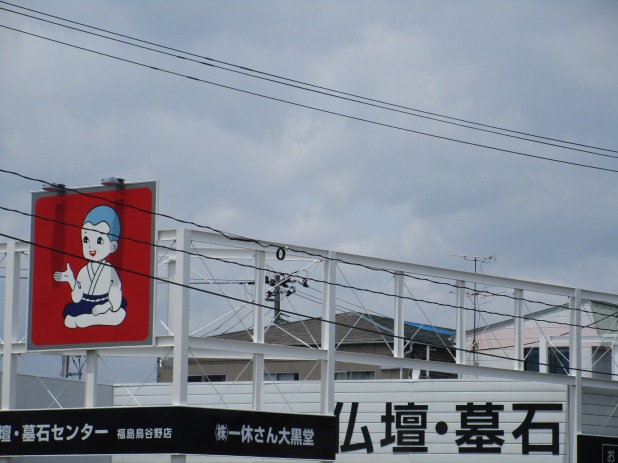 Did you forget this was Japan?  Here’s a reminder.  A Buddhist altar (and other Buddhism related items) store.

It’s June as I type this…..the season of hydrangeas in Japan.  They are extremely common during early summer. 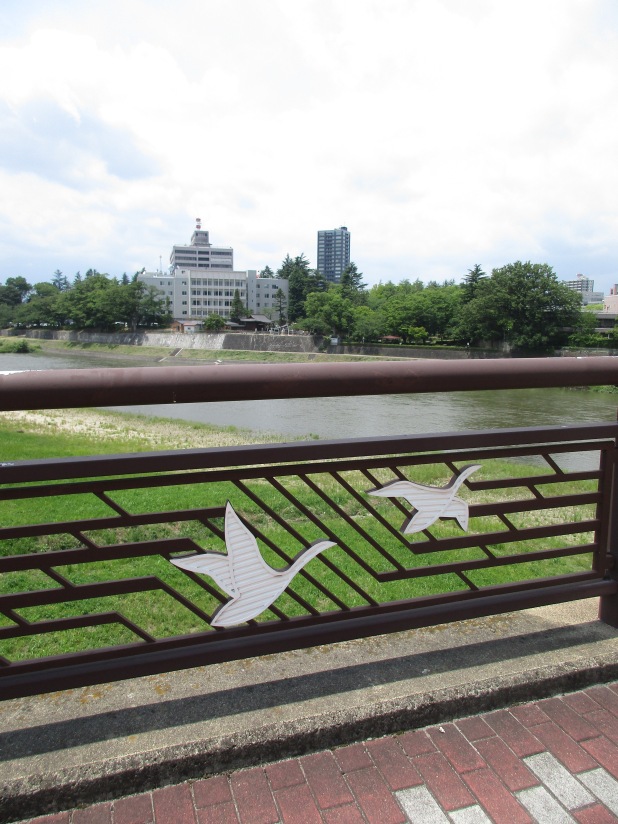 This is heading back, but on  the opposite side.  Northern Japan is a winter area for swans and other birds.  So bird watching is popular.  (During summer the swans head to Siberia.  I don’t blame them.  Summer is hot here!) 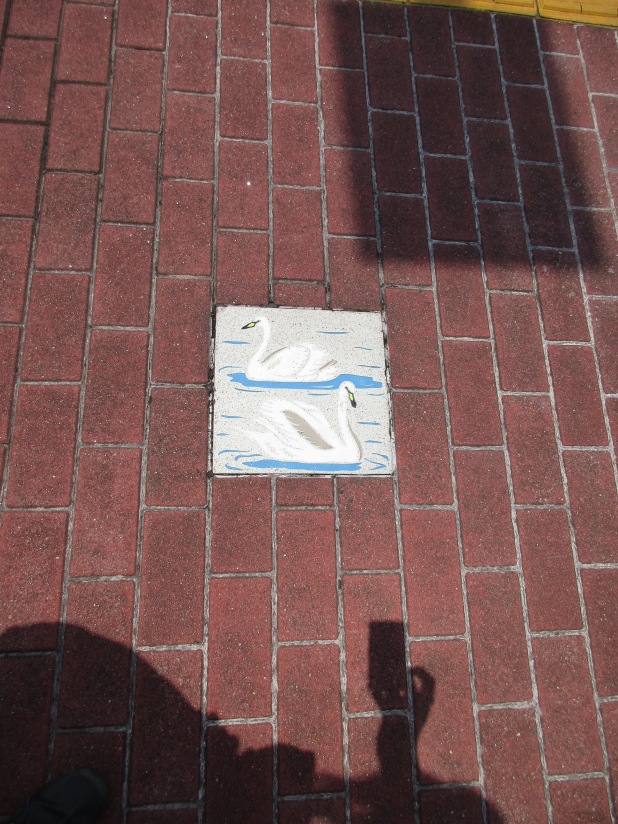 Did you enjoy our little trip?   I sure had fun, and remember getting out and exercising is the greatest happiness in the world (after petting cats.)