I haven’t had really anything important to post.  But then just now I saw this article:

If you can read it, it is about a court ruling that a nuclear power plant in Japan can not restart. This power plant is in Ehime Prefecture. It is NOT here in Fukushima.

Getting into political issues here, some people here in Japan are VERY  MUCH against nuclear power, especially in the aftermath of the 3/11 meltdowns (which were caused by a tsunami.)

The Liberal Democratic Party sounds, well, liberal to us Americans. But it’s not. It’s actually conservative. I think it’s Japan’s equivalent of Republicans, I guess? It’s got a lot of power and support in Japan….it’s the most powerful political party, actually. And I like I said, it’s in favor of nuclear power, so I guess nuclear power in Japan is not going anywhere anytime soon.

Recently I noticed two articles about testing of food from Fukushima.

I will start with the first one:

The above news article is how consumers overseas don’t know that Fukushima food does get tested for radiation.

My thoughts: I think people DO hear that the food gets tested, but they don’t believe it. Me personally? I’m like meh at this point. My cousin got hepatitis from a grape in America so let’s face it, food has got all kinds of nasty stuff on it.  People who live in, say, America, are all riled up that the rice in their sushi might come from Fukushima (or that the fish might have gotten killer amounts of radiation while swimming in the Pacific Ocean) but they don’t worry about all those pesticides on the food? Pesticides are also a huge problem.

I wouldn’t have wanted to eat Fukushima food in that first year after the disaster (and yes, they were testing the spinach and milk, etc, not selling it, just testing it) but now,  six years later, I think the food is okay.  I might be wrong. Who knows. Don’t eat if if you don’t want to. But don’t just think RADIATION GAAAAAHHHHHHHHHHHHHH and start freaking out. It’s just silly to panic like that when there are so many dangers (to tell the truth, worse dangers) out there.  But like I said, don’t eat the food if you don’t think it is safe.

How they test here in Fukushima is to take a sample of the crop, and test that–and assume the rest of the crop in the lot is acceptable if the results of the sample are acceptable. So if you are a doubting sort of person, you might think that either 1) the tests are not actually done or the results are fake. (I am not saying this is the case, but I know there are a lot of conspiracy theorists out there.) or 2.) the sample may be okay but the rest…perhaps not.

Like I said, if you believe that Fukushima food is unsafe, don’t eat it. But don’t blame Fukushima for it and say nasty things about us. It wasn’t our fault. It was a Tokyo-owned power plant that supplied electricity to Tokyo that did the damage.

So anyhoo…this is the other article. Rice testing will decrease, going from testing all the rice to testing only samples (like other crops.)

Today I want to talk about Misuzu Kaneko, a famous female poet here in Japan. She lived from 1903 to 1930 (she committed suicide.)

I didn’t know much about her until I read online about the book that is shown above in the photo. The book is called “Are You an Echo?” It’s wonderful. I do recommend it. It covers her (sad) life story and also includes her poetry. One of the neat things about it is that it has both English and Japanese.

When the book was introduced, Misuzu Kaneko was linked to the 3/11 disaster by the creators of the book. So I thought, maybe she was from Tohoku? No, not at all. She really has no relation at all with Tohoku. She’s from Yamaguchi Prefecture.

I got the following map of Japan from Wikipedia Commons, which says it is public domain (and therefore free to use by anybody) 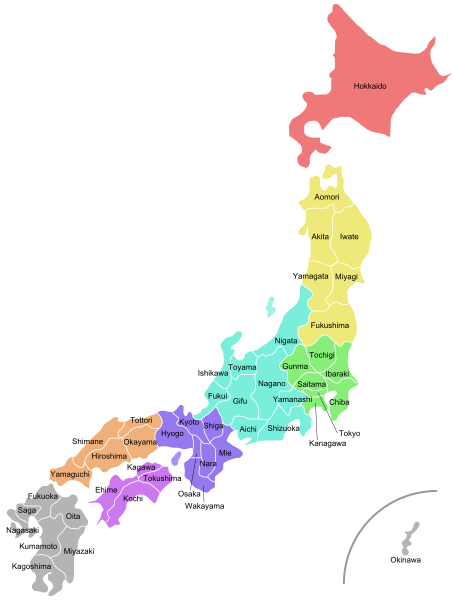 Tohoku is the yellow area at the top. Yamaguchi Prefecture (Kaneko’s home) is at the bottom of the orange part. (The entire orange part is the area of Chugoku.) I very much doubt Kaneko ever visited Tohoku in her life!

The reason that the book (and this website about her) links her to the 3/11 disaster is for this reason:

After the disaster in March of 2011, for people in Japan who were not directly affected by the disaster and could watch their TV, regular TV was NOT shown. It was news about the disaster all day long, every day. (I supposed some cable and satellite channels might have had other programs, but I am talking about the basic free TV channels.) There were NO commercials during the news in the days in the disaster. Instead of commercials, there were only special public service announcements, with warm caring messages, like “Be kind to others” and “Helping others is good.” I very much remember these commercials—there were a few different ones, but basically the same ones were played over and over and over……………..  They were nice messages, though, so I don’t think we minded?

Okay, back to Kaneko. The reason why the book’s creators link her to the disaster is that one of her poems was used in one of the commercials (I think only one commercial–I’m not really sure.)

If you watch the commercial, that’s one of her poems.

(If you can’t watch the commercial, the poem is as follows:

Later on, I feel lonely.

Is this an echo?

No, it happens to everyone.

(I changed the translation in the video slightly as it is a little rough.)

And moving right along….

You can listen to Matthew Winner’s interview with two of the creators (David Jacobson and Toshikado Hajiri) of the book here.

Years ago I was young, skinny and beautiful (YES I WAS BEAUTIFUL! WE ARE ALL BEAUTIFUL!) and I worked for the JET Programme, a government-run organization that places Americans (and other nationalities) in schools across Japan. I was placed in Matsuo Town, Chiba Prefecture. Matsuo was a very small town, so small in fact that it no longer exists. It got swallowed by a larger town.

So, as I was saying in my previous post, in 1997 I tagged along with the third year students on their field trip up to Fukushima Prefecture. I didn’t know anything at all about Fukushima, but the teachers reassured me it was beautiful (SEE! WE ARE ALL BEAUTIFUL!) and historic.

I really enjoyed the trip. By the way, back then, digital cameras were a very, very new thing and I did not have one. (I did not even know what they were, having never seen one.) So these are paper and ink photos from my album.

The above photo shows AizuWakamatsu’s castle. I don’t remember going there, but I guess I did (and with a gaggle of students.)

Here was the camping area we stayed at. I do remember this. It was at the area of Goshiki Numa, and I thought the lakes were lovely. Plus their name is so neat: “Five color swamps”

You can see the scenery in the photos.

I also very much remember this. A bus took us to the top of Bandai Mountain, which is a volcano that exploded in 1888. But it is now considered dormant. So the students, teachers, the guide and I all stood on the rim of the volcano. I thought it was so cool. You can look down into the funnel into the middle—it wasn’t smoking or fiery. It was just dirt.

Once we got up there, I was a little nervous about being so close to a volcano. And knowing what I know now, I was right to be fearful! Mt. Bandai does not explode nowadays………but there’s always the chance.

Still at the top of the mountain. I wanted to show this photo…the girls having so much fun. I have more photos like this.  Fun times in Japan.

I think with the advent of the internet and digital cameras, the JET Programme no longer allows the foreign teachers to photograph the students.  Nobody wants to have embarrassing photos on the internet!  I think in my case it’s all right–I was allowed to take photos, and I blotted out the students’ faces.  By the way, these students (who are fifteen years old in the photo) are currently thirty-five years old!!!!!!!!!

You can read news from Fukushima, by Fukushima from the Minpo website. It’s the regular news for Fukushima, not meant for the outside, but for us who live here.

Once thing you need to know: Japanese schools often have field trips. It starts when the kids are young, on field trips to nearby parks and camping areas. Then as the students get older, the field trip becomes a once a year extravanganza to far away places. I think the idea is to introduce these important places to children who might normally not have a chance to visit.

My son, in his last year of junior high, went to Kyoto and Osaka. These two cities are far away for us. As a family, we frequently get to Tokyo, but Kyoto and Osaka are further south, so we basically never to there. So it was nice for him to to get the opportunity to hang out with his friends in those places.

My very first visit to Fukushima Prefecture was in the nineties on a school field trip. I was teaching at a junior high in Chiba Prefecture (near Tokyo) on the JET Programme. The school invited me to tag along on the third year students’ trip to Fukushima. I did not know ANYTHING about Fukushima. We went to the Goshiki Numa in western Japan near Mt. Bandai. Goshiki Numa are five beautiful lakes created by an explosion of Mt. Bandai in 1888.

So you can see, way before 3/11 the earthquake occurred, Fukushima was a common sightseeing spot for school kids in the Tokyo area. Many of the Tokyo area kids live in a city atmosphere, and for them, coming to Fukushima meant experiencing a more rural part of Japan.

You can see a live webcam viewing of one of the lakes if you click on the link below. Just don’t do it during the Japanese night, or it will be dark!