I was doing my “around the world” cleaning in which I deep clean my entire home. It takes about two years. I’m almost finished. Then I’ll start again because during the two years, everything got messy again.

Anyway, I came across my journal from 1997. (Like Greg Heffley, I wrote that it is NOT a diary. It’s a journal. Yeah, I really wrote that. LOL There’s a long story behind it. Diaries contain juicy secrets. So the key is to insist it is a journal, and then it sounds boring and nosy people will leave it alone.) 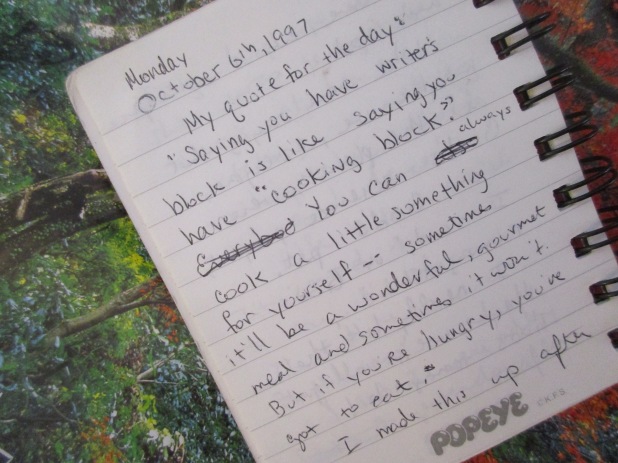 Coming across one of my journal notebooks, I’m thinking, “I haven’t touched this in years. Since before the 2011 quake. It’s probably covered in radiation.” No kidding, I think stuff like that. Living in Fukushima, radiation is something we think about. But at least my home isn’t in the forbidden zone. Those people had to leave their belongings behind when they quickly left immediately after the quake and the resulting problems at the nuclear power plant. Later, they could go back and retrieve important items–but their photo albums and journals probably got covered with radiation if their home is in the forbidden zone. (The area which received the most radiation.)

On to less grim topics.

My quote for the day:

“Saying you have writer’s block is like saying you have “cooking block.” You can always cook a little something for yourself–somtimes it’ll be a wonderful, gourmet meal and sometimes it won’t. But if you’re hungry, you’ve got to eat.”

I made this up after reading about some guy who spent 3 years with writer’s block! (?!?!) Ridiculous!

Heard on the radio today: Ray Bradbury is 77 years old. He has 1 rejection slip for every week of his life!