I love books.  I went to the Koriyama City Public Library while I was visiting their fine city.

After the quake in March of 2011, this library was closed to patrons due to damage (caused by the tremors) to the building. It took quite a long time for the damage to be repaired and the building to be declared safe.

Keep in mind that at that time, children could not play outdoors due to the radiation in the city. Thus they couldn’t play indoors and they ALSO could not go to structures which had been damaged (like this library.) It was not a good time for children here.

(My own son was seven then, and he is sixteen now.) 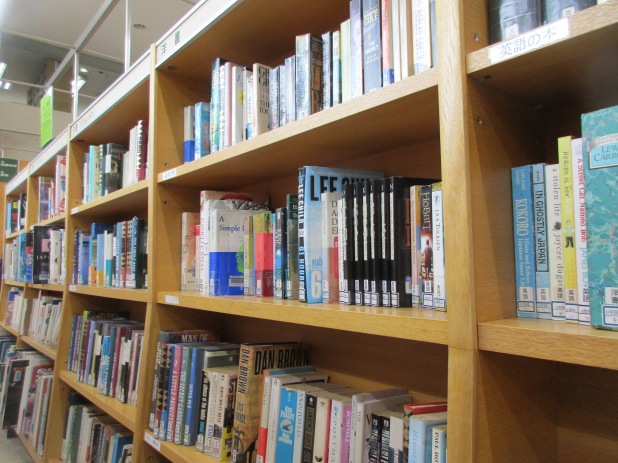 This library has quite a lot of books in non-Japanese languages.

In written material, the most common language you’ll find (other than Japanese, of course) in Japan is English. After that–Mandarin, Korean, French. Then maybe German, Spanish, Vietnamese.

However, materials in English far, far outnumber materials in the other non-Japanese languages. I consider myself extremely lucky to be living in Japan as a native English speaker and to have access to written material in my own language. It’s very much a privilege.

In United States, I don’t think I ever saw a single Moomin book. (Written and illustrated by Tove Jansson.)

But in Japan? Extremely popular!

At a fantastic restaurant in Koriyama City with other AFWJ members.